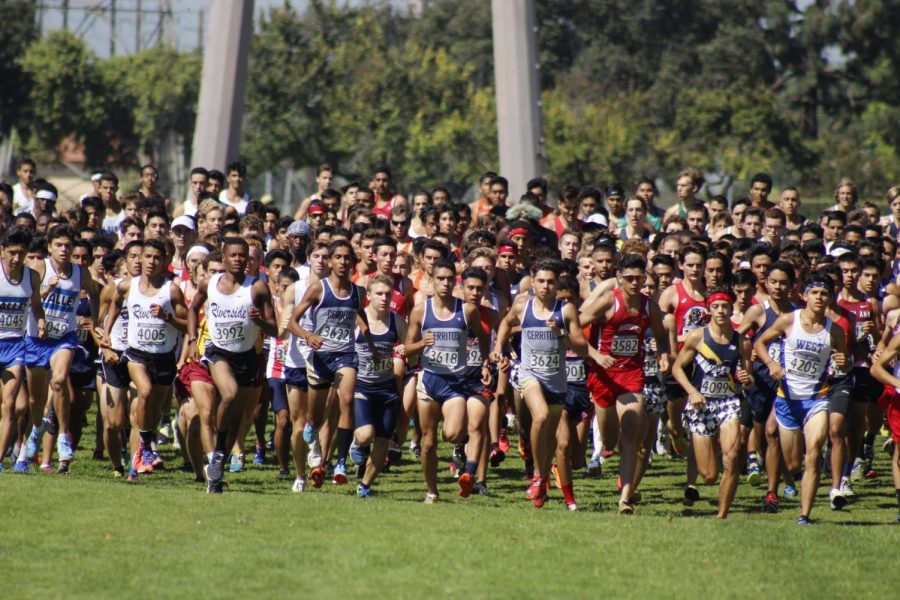 The Cerritos College men's cross country team brought in 259 team points by the end of the race. The Falcons came in eighth place in the Southern California Preview meet against 27 other community colleges on Sept. 14 at Don Knabe Community Regional Park.

The women’s team came in 17th place with 424 team points amongst 20 other teams running a 5k race.

This being a home course, head coach Bryan Ramos expects the team to know the course really well.

Ramos said the women’s team was running short in terms of what they were able to score due to an injury that sophomore captain Monica Bautista suffered in the warm-ups that day.

“We got out well, but at the mid-point we just faded and that’s really where we need to work on,” Ramos said.

He continued, “This is a preview meet, so we’re gonna get a chance to run this [course] twice again.”

Freshman Grace Cervantes said, “I felt good about myself, my time keeps improving every race.”

Cervantes came in first for the women’s team at the SoCal Preview.

“It makes me happy because I work hard in practice, at the end of the day hard work pays off,” Cervantes said.

No matter what pain Cervantes feels during a race, she tells herself that it won’t last forever and pushes herself to finish the race faster.

Closing the gaps and working as a group is something that the team needs a lot of work on.

Cervantes feels, after being three meets in, more confident going into the team’s next meet.

Sophomore Debora Lopez-Guzman said, “I felt like I could’ve gone faster, my time wasn’t as good as I wanted it to be.”

Lopez-Guzman said she needs to stop being comfortable during the race and if she sees herself closing in on a teammate she should catch up instead of deciding not to.

She continued to say that the team has been getting better each race, so by the end of the season they will be at their goal.

The men’s team ran a four mile race and placed eighth with 259 team points competing against 27 other schools.

Ramos said, “I was happy with how the men’s team went in, our top three looked great, our fourth kinda faded and now we just need our fifth guy to step up.”

Ramos explained how the other schools they came up against are schools with are deep and have guys that can step up.

Zuniga felt dead from the start of the race and says that his confidence and choices played a big role in how he ran at the SoCal Preview meet.

Zuniga said that team is doing good, but would like to personally help the team stepping up in competitions.

Freshman Pablo Calderon said, “I believe I did good, but I know I have much more in store and could’ve done better.”

Being only three meets into the season there is still a lot of pushing and hard work to do for the men’s team, according to Calderon.

“We’re doing good place wise, but we need to work on our pack running,” Calderon said.

Calderon ended with, “I like not to overthink when I’m running because then I’ll get nervous and that’ll hold me back.”

The Falcons will travel to Las Vegas this weekend for the UNLV Cross Country Invitational on Sept. 22.

Ramos said the competition for this meet will be at a higher caliber because the cross country team will be running against division one and two teams, but believes that they can handle the meeting.