Falcons’ soccer ranked No. 1 in the country 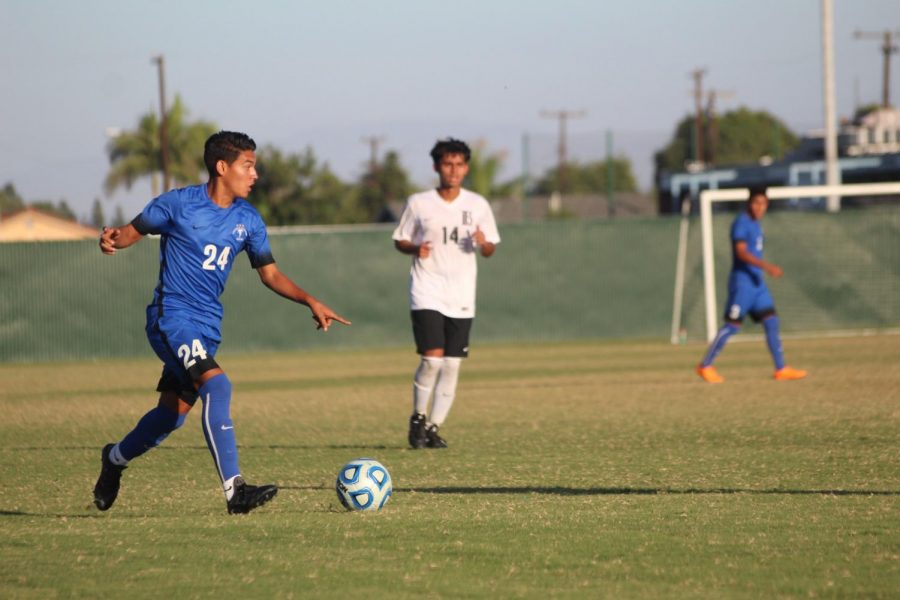 Sophomore midfielder No. 24 Carlos Perez calling for a play during the matchup against Long Beach City College at Cerritos College on Oct. 9, 2018.

The Falcons men’s soccer team is 13 games into the season and the players say they’re looking forward to the state title as they hold onto their No. 1 spot in the country.

Men’s soccer has won 10 games, tied twice and lost one match so far in the season. They have scored 29 goals and conceded nine goals.

They won 1-0 against the team’s biggest rival during an away game against Mt. San Antonio College on Oct. 12.

Artiaga said that it was one of the games the team looked forward to this year because at the end of it, both will be contending for the state title.

“The execution was great, we really played lights out,” he said.

Artiaga expressed how the team has met expectations saying, “How can you complain if your No. 1 in the country?”

The hardest part for Artiaga now would be to keep the team motivated and hungry to continue winning games.

“It’s really easy to put it in cruise control, but we’re barely starting to hit our stride and peak [of the season],” Artiaga said.

Artiaga is hoping the team can continue performing at a high level, so they can have home field advantage in the playoffs.

Going into the next game against Chaffey College, Artiaga is confident that the team will win as long as they continue to play hard and do their job.

Within the season campaign the team has lost some key sophomore players due to injury.

Some of the players include Javier Cortez, defender; Bryan Rodriguez, midfielder; Carlos Payeras, forward; Christian Perez, forward who will be missing the rest of the season.

Perez said, “Despite being out for the season, I have confidence in my team. They’re showing results and all the work they put in is paying off.”

Perez is going to be supporting his team from the sidelines every step of the way for the rest of the season.

Even though the men’s team is ranked No. 1, Perez says that the national ranking doesn’t mean anything until they actually win something.

“I feel like my team is gonna take it this year, I have no doubts,” Perez said.

Sophomore goalkeeper No. 1 Jordan Aldama is proud of the guys on the team and the program.

“We deserve that ranking and we’re obviously showing game in, game out,” Aldama said.

Aldama decides how to lead the team based on the way the game is going at that moment in time.

The Falcons are prideful in keeping clean sheets and making sure the ball doesn’t go in at all.

“No keeper is ever happy when they get scored on, but I try to keep it positive with my team, so if they see I’m positive… everything will be alright,” Aldama said.

The men’s soccer team most recently won an away match against Chaffey College 3-2 on Oct. 16 holding its top spot in the nation.

Like the men’s team the women are also ranked No. 1 in the nation at the moment and are one of the few teams left that are still undefeated.

The women’s soccer team are riding a 13-game winning streak, the team has managed to score 71 goals within the 13 games they’ve won and have only conceded one goal early in the season.

Following the game against Mt. San Antonio, which resulted in a 4-0 win for the women’s soccer team, they won 3-0 in an away match against Chaffey College on Oct. 16.