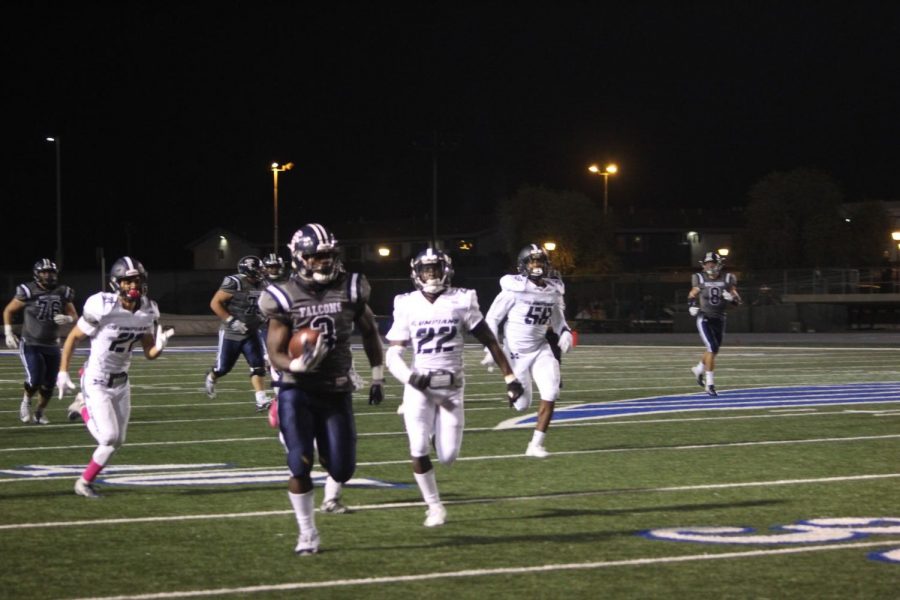 Sophomore running back No. 3 Rhamondre Stevenson breaking the defense and running the ball in for a touchdown. Stevenson ran for 270 yards in the game against San Diego Mesa College at Cerritos College on Oct. 20, 2018.

The Falcons got back in the winning column after defeating San Diego Mesa 50-21 in the Homecoming game on Oct. 20.

It was the first time the two teams have clashed on the gridiron in 21 years.

Cerritos’ statement win gave them their fourth win on the season. The team now has a record of 4-3.

The Falcons first touchdown came on their second drive of the game as sophomore running back No. 3 Rhamondre Stevenson, punched in the 1-yard touchdown run to give Cerritos its first lead of the game.

However, the extra point would be blocked making the score 6-0.

Before this win, the Falcons had dropped three straight games by an average of 14 points. All three games came down to minor mistakes and could have gone either way.

“We just did not like that feeling, from now on we’re rolling, planning on not losing,” Stevenson said.

Stevenson had yet another big game, he rushed for 270 yards and scored three touchdowns.

Cerritos’ defensive ends came up big on Mesa’s next offensive drive as No. 32 Jason Nettles picked up a fumble caused by No. 56 Jordan Thomas.

Nettles would score on the fumble recovery giving the Falcons its second touchdown of the game making the score 13-0.

Mesa then drove down the field and scored on the next offensive drive cutting the Falcons lead to just six.

Bravo passed to his receiver No. 8 Jacob Gasser, who then broke a couple of Mesa tacklers and scored Cerritos’ third touchdown in the first quarter.

The sophomore quarterback, Bravo, racked up 10 completions, for a passing total of 174 yards.

He spoke with humility about his performance, saying, “I didn’t have to make many reads or anything, I just put the ball in the hands of the playmakers and they did what they could.”

At the end of the first quarter, Cerritos lead 20-7.

In the second quarter Nettles gave the ball right back to Bravo and the offense as he sacked Mesa’s quarterback on fourth down for the stop.

The offense stalled as they attempted to go for the score on the fourth down but were stopped short of the first down line.

With a minute left before halftime, Cerritos attempted a field goal to increase their lead by three but it was blocked by Mesa’s defense and returned for a touchdown.

Going into halftime the score was 21-20. Cerritos trailed Mesa by one.

Head coach Dean Grosfeld told his players “Don’t shoot yourself in the foot,” after giving up the lead.

Grosfeld continued, “I just told them to relax and don’t keep your head down.”

The first half told the tell of a close game, that could go either way. However, the second half was a different story, mainly due to the Falcons’ stingy defense not giving up any points to San Diego.

One turning point in the second half for the defense was when middle linebacker No.10 Latrell Stearns intercepted a pass and returned it for six points to increase the Falcons’ lead.

“It felt great, that was my second one of the season so it was good for our defense,” Stearns stated after the game.

Grosfeld loved how his defense played in the second half and had praising words to say after.

He said, “They played lights out. Anytime your defense can score twice, it’s incredible!”

The Falcons offense came out after halftime and put up 23 points in the third quarter giving the team a 43-21 advantage.

In the fourth quarter the Falcons didn’t need to do much more scoring to secure the win. The team went 7-0 in the fourth.

Next up Cerritos football will take on Mt. San Antonio College on Oct. 27 at 6 p.m. The away game is set to be played at Covina District Field.

One player who is ready for the upcoming matchup is Stevenson, the Falcons’ star running back. He said, “We got to get another win for sure. Mt. SAC they’re going to be a tough team, but I think we’re going to come harder, we’re going to get the win.”

Cerritos has not played Mt. SAC since 2013. This conference rival has won the last five matchups against the Falcons.