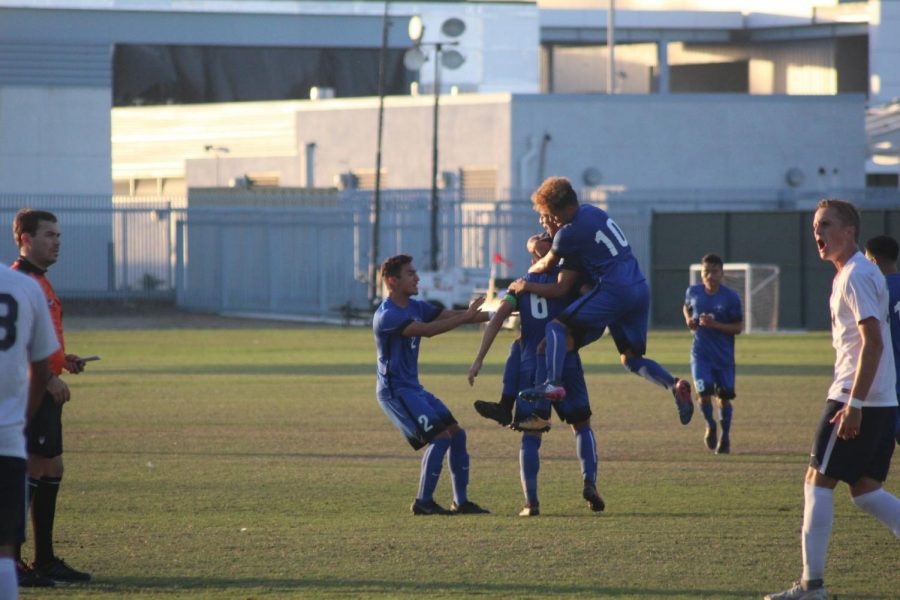 The team celebrates a goal scored by sophomore captain midfielder No. 6 Esteban Camacho. Camacho had two shots on target in the game against El Camino College on Nov. 6, 2018 at Cerritos College.

The Cerritos College men’s soccer team obtained its 16th win of the season against El Camino College on Nov. 6 with a score of 5-0.

Sophomore midfielder No. 10 Erick Gallinar made three assists, sophomore goalkeeper No. 1 Jordan Aldama and freshman forward No. 19 Brandon Pelayo made an assist. Camacho’s goal was unassisted.

Cerritos had a tough first half, despite defender Cueva scoring in the first minute of the game; the Falcons could not get another goal until the second half.

Cerritos dominated by scoring four goals in 30 minutes to win the South Coast Conference tournament with one game left to play. Diaz scored in the 52nd minute midfielder Camacho scored in the 69th minute, then Diaz scored again in the 72nd and 81st minute.

A total of 25 fouls were called by the referee, 13 fouls for El Camino and 12 for Cerritos. Freshman forward No. 26 Bryan Villalobos and midfielder Armando Alonzo were issued a yellow card for fighting in the 65th minute.

Aldama made five saves which kept the Falcons in the lead, these saves led to another clean sheet. El Camino goalkeeper Brandon Cardenas made 10 saves in the match.

Head Coach Benjamin Artiaga stated, “I am proud of their hard work and dedication. We are not here to be an average team we are here to win a state championship. It is an honor to be part of this group. We have the best goalie in the State of California.”

Midfielder Camacho said of the team’s performance, “We had a decent first half, but we came in stronger in the second half.”

Camacho on the goal scored stated, “I saw the opportunity; I went with a lot of luck and was very happy.”

Midfielder Gallinar said, “As a team we work really hard. El Camino gave us a great game, however they could not score.”

Sophomore defender No. 5 Luis Lira stated, “We were dominant in the match and we are looking forward to what is next.”

Lira of the next match against Long Beach City College said, “It will be a tough game. All we need is a win and we will be successful.”

The Falcons have one more South Coast Conference match, despite winning the title on the road against Long Beach City College on Nov. 9. If Cerritos wins their No. 1 ranking in the nation will be official.

Most recently the Falcons defeated Long Beach City College 3-1 on Nov. 9, they will follow the regular season ending with the Southern California Regional playoffs starting on Nov. 17.