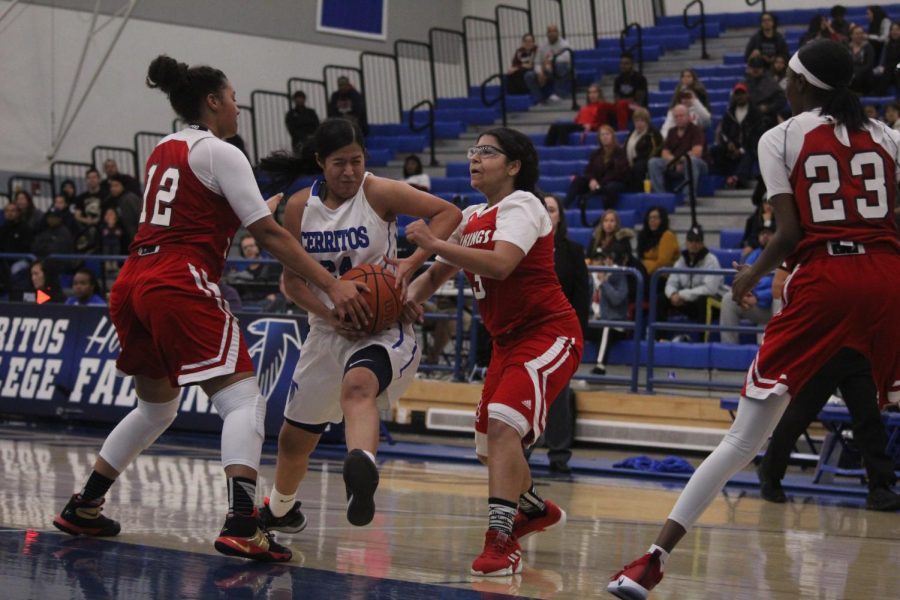 Sophomore guard No. 24 Serena Rendon fighting through the contact to get to the basket. Rendon finished the game with 17 points and seven rebounds in the game at Cerritos College against Long Beach City College on Feb. 8, 2019.

With constant pressure throughout all four quarters of play, the Falcons managed to end the game with a 19 point lead over the Vikings extending their win streak to four, they are now 5-1 in conference and 16-10 overall.

Head coach Trisha Kozlowski said, “I thought we battled, we came out and played 40 minutes and that second half we focused on the little things, we gave them some easy buckets because we weren’t mentally as sharp as we needed to be.”

She continued, “And in that second half, we just had a lineup out there that was stopping them and making it really difficult for them.”

The Vikings were playing with only five players and had no room for rotations, still managing to get 55 points it wasn’t enough to overcome the Falcons.

Following this win the Falcons now have a chance to tie for first place in the South Coast Conference South Division when they face El Camino College on Feb. 13.

“Whenever you have a team that can do that, you have to just applaud the players, their commitment… they deserve the right to go and play for a conference title because they put the work in,” Kozlowski said.

Kozlowski is confident that the team can win this time around against El Camino College saying, “I believe in this team, I believe in what we bring to the table, I believe we can go in there and win and win out. That’s my mentality, that’s how I prepare them in practice.”

Cerritos College ended the first half with 39 points against the Vikings, followed by a 35 point performance in the second half boosting them to win the game.

Kozlowski ended with, “A win is a win, whether it’s by 20 or two [points], I can’t be prouder of this team, it’s a testament to their hard work.”

The Falcons forced 24 turnovers and managed to score 22 points off of turnovers, the team also had 29 second chance points.

Garcia said, “My shot was a lot better than used it to be, other than that I need to work on boxing out, but it was a pretty good game for me.”

Garcia tries to stay focused on the game plan that was set in practice the day before when it comes to playing big rival games.

She ended, “The past few games we’ve been winning by a lot and we’re at our peak right now and hopefully we just keep going up.”

The Falcons now only have four conference matches left in the 2018-2019 season, the team will travel to El Camino College Feb. 13 with a winning streak momentum, Cerritos College previously lost against El Camino College 72-61 on Jan. 25.