Vonn retires on the podium

She battled a crash in a run earlier in the week at her final Super Giant Slalom along with her “rib popping out” on Friday Feb. 8 to somehow be able to recover from both of these incidents and still obtain a bronze medal.

Vonn had chosen to skip out on speed events prior to injury to save her body of further harm and to focus on one race.

She was considered an underdog making her way into the starting gate, as she had placed out of the top three on her previous run, she had something to prove.

As Vonn made her way down the course it was as through she was back in 2002, at the age of 16 and at her first World Cup in Park City, Utah.

Lindsey finished the course and saw her time knowing it was enough after receiving the news she looked as through it was only right for her to end her career with a medal and a podium spot.

She has completed what most aspire to do in a lifetime, which is winning 85 gold medals in Olympic and Championship series combined and adding one more at the world championship downhill.

Vonn after just five days from tearing a ligament and having the wind knocked out of her during a crash with also left her a black eye she was able to take the podium.

Throughout her career, she sustained too many would-be career ending injuries, including broken bones, fractures, concussions, losing all the cartilage in her knees and countless knockouts after crashes has risen to the podium once again.

The amount of injuries Vonn has suffered in her career have forced her to hand up her skis for good. She no longer has cartilage and through her race said she could feel her bones rubbing together.

She will retire after 18 years of competitive professional skiing and being known as the most decorated U.S. skiers of all time.

Vonn has a total of three Olympic medals two at Vancouver in 2010 and one in 2018 at Pyeonchang, China. Along with eight World Championship medals spanning from 2009 to the one won on Sunday.

Along with a total of 148 Podium finishes, Lindsey has also been known to be a strong business woman. 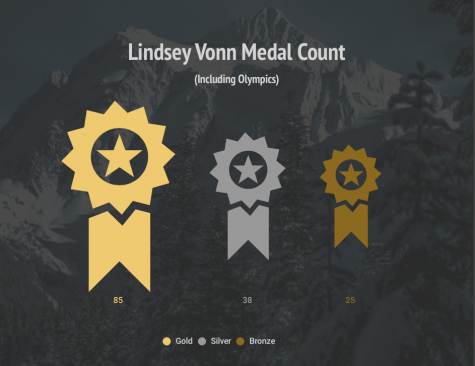 Lindsey Vonn will forever be remember as one of the greatest American winter sports athletes of all time and for her endeavors after skiing, Vonn has plans to continue her retirement plan of opening her own beauty business at least can assume for the moment as she has kept it a secret.