The End of an Era

There are not many running backs coming out of a community college that can break their schools rushing record with 2,111 yards in a season, become the nation’s number one leading rusher and can leave their school by becoming the sixth player all time to do so.

Oklahoma Sooner commit, Rhamondre Stevenson, did that all in just one season at Cerritos College.

Stevenson, a running back out of Centennial High School in Las Vegas, Nevada, decided to move to California and play his first two years of college at Cerritos.

Stevenson chose this route due to that he was a non qualifier coming out of high school which left him with only one option and that was attending a community college.

This was the only route Rhamondre could take if he wanted to play at the next level.

“I seen a history of guys from Cerritos who made it to the division one level and that motivated me to believe that I can too,” Stevenson said.

Cerritos College football head coach Dean Grosfeld, saw the potential Stevenson possessed coming out of high school and automatically knew Rhamondre was the type of running back he wanted on his offense.

“We knew all along that as soon as he got in shape, he would be the type of running back that he was.”

Throughout his sophomore season, as Stevenson hurdled and ran defenders over, he became that running back as he averaged 9.5 yards per carry while scoring 16 touchdowns.

Coach Grosfeld shared what it was like to coach Stevenson his first year as head coach.

He said he’s an “awesome human being, great kid, [has] good work ethic, he’s a special talent but also a special kid.”

Coach Grosfeld added on by saying how Rhamondre is a better kid off the field than he is on the field.

“He’s just a great kid, very respectful, very appreciative [and] hard working. He does the right thing, he’s not a kid that uses alcohol or drugs, he doesn’t do any of that stuff.”

“Breaking records at Cerritos was an unbelievable feeling because knowing how hard me and my team worked the whole time we were together, it was showing in big ways.”

Carl Odom, who played backup to Rhamondre, reflected on how watching Stevenson play made him a better running back.

“Watching him definitely made me a better player. I learned more about the position as a whole and how he would put the team on his back at times taught me a lot as well .”

One game Stevenson will forever remember as a Falcon will be the last game of the season against Golden West.

“Unforgettable” is what Stevenson described that night as.

“It was my last night with my juco brothers and coaches and we ended on a great win,” Stevenson said.

Odom, who looked up to Rhamondre, described his relationship with him throughout the season.

Out of all the offers Stevenson had, Oklahoma set itself apart from all others since when they first offered him till the day he committed.

Stevenson described his visit to Oklahoma as the icing on the cake for him.

“The family atmosphere there was unbelievable. From the coaches, players, fans, and faculty, the history and success of OU can’t be overlooked, especially as a running back.”

Coach Grosfeld explained how excited all the coaches including himself will be to see Rhamondre play on tv despite coaching games on saturday as well.

“It’ll all be hard for us, but we’ll make sure we’re all taping the games and we’ll support him like crazy. He’s going to do a great job.” 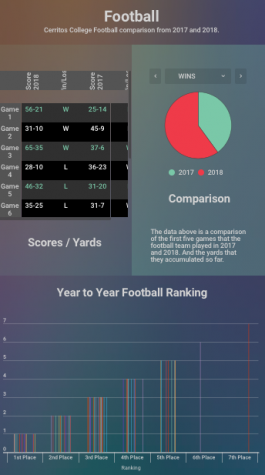