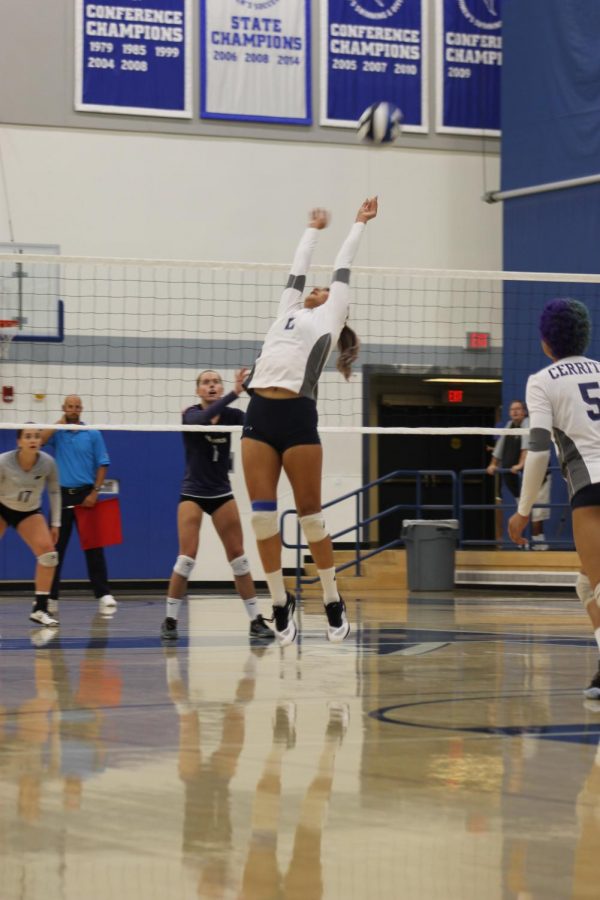 Mrika Granoble set the ball for a pass to Alexia Torres for a point. the team defeated the Hawks on September 6, 2019

Going into this contest the Falcons were coming off back to back losses. It was evident the Flacons were hungry for this win in front of their home crowd.

The Falcons would jump to a 12-5 lead early in the first set, led by a couple of kills by Jackie Dickson.

Early on it looked as if this would be a quick night in favor of the Falcons as the Hawks defense looked confused and out of sync on most of the Falcons kills, but to the Hawks credit they would pull it together and go on a 9-2 run to tie the game at 14-14 all in the first set.

After a few back and forth scoring runs by both teams, the Falcons would eventually outlast the Hawks by taking the first set 25-18, capped off with the winning kill by Alexia Torres.

In the second set the Santiago Hawks would come out firing on all cylinders and would take an early 4-0 lead on the Falcons, on 4 straight kill points.

The Falcons would quickly rally back to tie it up at four a piece, but as quickly as the Falcons tied it, the Hawks would extend the lead 18-10 and never look back taking the second set 25-13.

Heading into the third set with the series tied at one a piece, set four would be a repeat of set three, but only this time it was the Falcons jumping out to an early 4-0.

But Santiago Canyon would rally back and tie it at six all, but the Falcons would put together a nice run of kill points to pull away from the Hawks and win set three 25-15 capped off with the game winning point by sophomore Mirka Granoble.

Cerritos Falcons would have a 2-1 series lead heading into set four looking to close out the match.

But the Hawks wouldn’t make it easy for the Falcons as both teams were battling throughout the set. Santiago Canyon would take a 21-18 lead.

As soon as it looked like Santiago would force a fifth set, the Falcons would rally back lead by clutch kill by Torres to pull the team within 2, 22-20.

After a Hawks point edge them closer to forcing another set, sophomore Brooke Winquist would stop their momentum with a crucial kill, which followed up by three straight attack errors by the Hawks to put the Falcons at match point.

But kills by Stacie Zumbek and Aubree MacDonald would then give match point to for the Hawks.

The falcons would than battle back with a another crucial kill by Winquist to tie the match, while a ball-handling mistake by the Hawks would give Cerritos another crack at match point and this time they wouldn’t be dined as Torres would slam her fifth and final kill of the game, ending Santiago Canyon’s night.

(Quote sentences question to Torres what does a win like this mean for the team moving forward?)

With this win the Cerritos Falcons women’s volleyball team improves to 2-2 on the year. The lady Falcons will look for their first road win, when they travel to San Bernardino Valley College on Wednesday Sept.11.