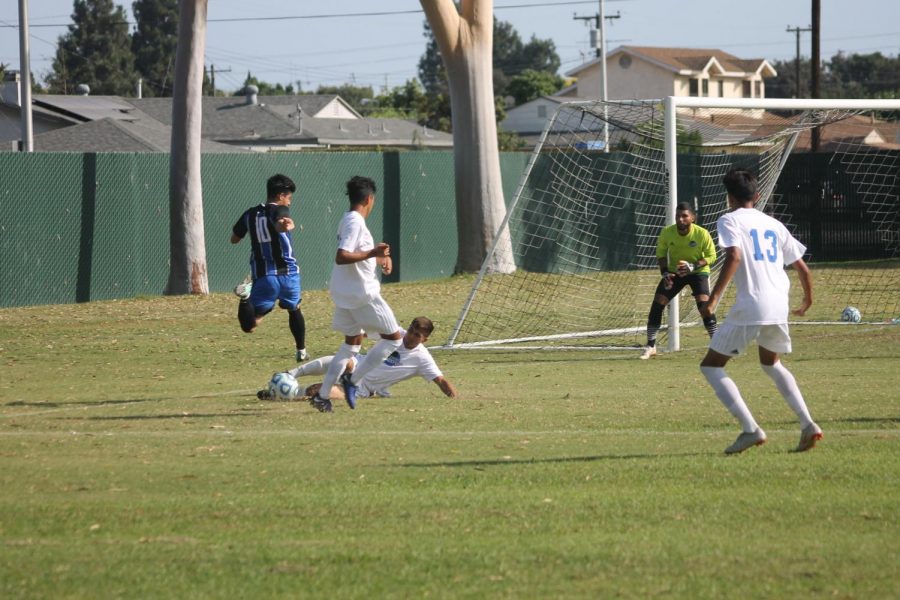 The Cerritos College soccer team is undefeated and won against Oxnard College. The team continued their winning streak on Sept. 10.

Cerritos played against Oxnard College on Tuesday, Sept. 10. The falcons continued their undefeated streak, taking a 2-1 win in regular time.

Sophomore midfielder No. 10 Bryan Ortega scored in the 48th minute. The sophomore shot under the far crossbar for his fourth goal of the season.

In the 79th minute, Hector Aguirre Ruiz scored an assisted goal, bringing the score to 2-0.

“The guys are starting to improve tremendously on offense,” said head coach Benny Artiaga after a previous win against Hartnell College. “Defensively, we have been on it all year. I’m proud of the guys and their progression.”

On Sept. 1st, the Falcons would play against the Rams’ of Fresno City College. The match ended scoreless, however Cerritos would come out victorious in penalty kicks 3-1. Thus winning the Hartnell Tournament back-to-back.

Freshman goalkeeper No. 0 Luis Enciso would record six saves; including a save during the penalty shootout. Fresno City missed their first two attempts.

Cerritos scored their first two attempts thanks to midfielder Ortega and forward Diaz. The game winning goal was scored by sophomore defender No. 5 Eugene Martinez.

After the Hartnell Tournament, Cerritos traveled to Golden West College, for a rematch of the state championship game last season.

The Falcons scored a late winner and kept another clean sheet. Sophomore goalkeeper No. 1 Jose Azpeitia would have a career-high 10 saves in the match against the Rustlers.

Assisting Azpeitia in the back row were sophomore defenders No. 3 Ernesto Cueva, No. 4 David Lermas, Martinez and No. 18 Jorge Cardona.

The late winning goal was scored by sophomore Ortega in the 89th minute. Assisted by freshman midfielder No. 24 Brandon Montoya.

When questioned on the goals scored midfielder Ortega stated, “It feels great to score goals, we know that these games are important. If we want to win a conference or state championship we have to get the job done on the field.”

The Falcons will now host a familiar team: Oxnard College. In the two matches last season, Cerritos would win both games 1-0. The second game went to extra time, because it was a second round playoff game.

It will not be an easy game for Cerritos, Oxnard have three wins and are also undefeated. The Condors have scored 10 goals and conceded three; and only one clean sheet. Oxnard have defeated Golden West 4-2 and Taft College in their previous match 2-0.

Cerritos have 29 games without a defeat since last season, hopefully it can be extended to 30 games this coming season.