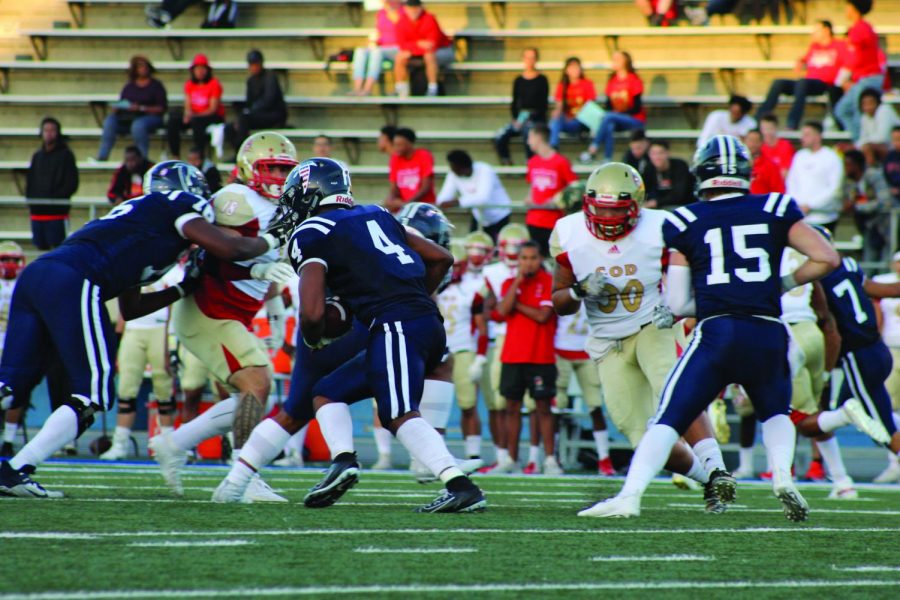 Carl Odom, runs the ball for a first touchdown during the game against College of the Desert. Falcons won the game 50-7.

Cerritos College had their third consecutive victory against College of the Desert, the final score being 50-7 on Saturday, Sept. 21.

The wide reciever made headway in the first quarter by a lead of 10-0, where sophomore wide receiver No. 7 Jovohan Tucker, made a 45-yard touchdown pass from freshman quarterback No. 15 TJ McMahon, and the sophomore kicker No. 89, Paul Rodriguez, which resulted in the team’s leading score.

Into the second quarter, it started off well as freshman kicker No. 42 Brandon Petruescu, made an attempt at a 29-yard field goal. It was then that sophomore No. 7 Noah Peterson, went racing down 35-yards for a touchdown and the score was brought up to 13-0.

At the very end of the quarter after a lot of runs and fouls, the roadrunners started to make their mark as a 10-yard pass was made from Kaleb Bryant as well as a kick from Diego Martinez, now making the score 13-7.

Coach Grosfield said that there were a few things the team could have done differently, to eliminate penalties and not worry too much about the other team, but other than that, it was a great play for the team.

The third quarter kicked off when sophomore running back No. 4 Carl Odom, ran 80-yards in all three plays that had the ball and Desert at the 4-yard line. He made it to a touchdown as well as Rodriguez who made another good kick into the field goal that earned the score 27-7.

The roadrunners were facing a dilemma at the third-and-six on the 11-yard line as sophomore tight end no. 84, Matt Den Hartog, made it to the 10-yard line of the Desert and that was when Cerritos was in the lead by 21 points by 6:34 of the third quarter. The score then changed to 34-7.

At the start of the fourth quarter, Cerritos made a fumble at the Desert one-line. But after a delay of game against the Roadrunners, running back Bronton Woodard was tackled in the end zone for safety by sophomore linebacker No. 54 Ikenna Ahumibe, and the score was brought up to 36-7.

“I think we played well enough to win the game. Offense was able to put some drives together, created turnovers, and only let to one score.” T.J. McMahon, quarterback, said.

It was then that a free kick was given to sophomore No. 6 Jacobi Hardy, who gave it a good 72-yard pass for another touchdown, getting the score up to 43-7. The Roadrunners were not doing so well as the score has stayed the same for them since the second quarter.

During the last minutes of the game, freshman running back No. 28 J’lon Manning, took all 48 yards for the Falcons in the last scoring drive, coupled with a touchdown by a 2-yard run, which made the score of the night, 50-7.

When the night ended, there were congratulatory high fives and cheering in the crowd as everyone witness the Falcons defeat yet another opponent.