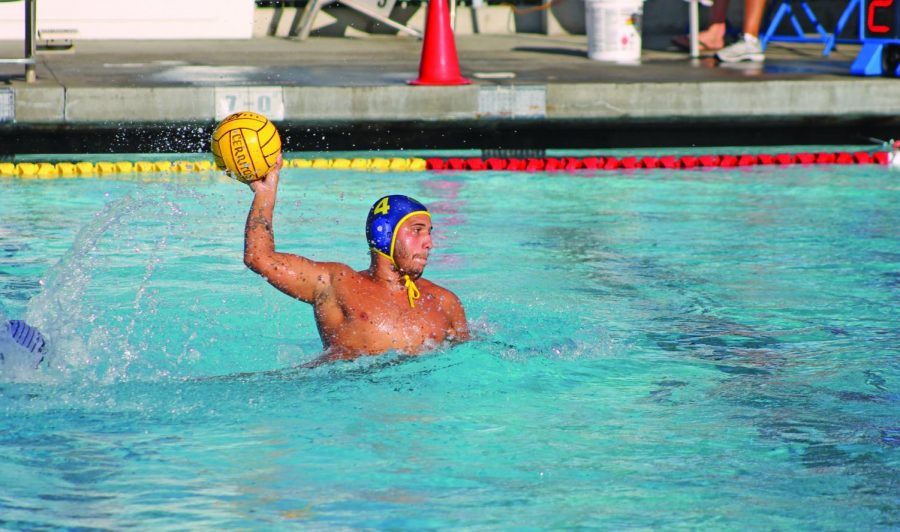 Player Brian Luque-Gutierrez, scores an unassisted goal in the beginning of the second quarter. The Falcons defeated the Rio Hondo Roadrunners on Oct. 2, 2019.

The Cerritos College men’s water polo team defeated Rio Hondo’s Roadrunners on Oct. 2, with a score of 22 to 3 in their second conference game of the season.

Sophomore Kevin Elizarraraz, driver no. 17, scored a total of five goals during the game, making him the highest scorer of the match.

The Falcons’ back up goalie playing was one of the highlights for some players on the team. With 11 blocks, he helped the Falcons keep their lead up for the last three quarters of the game.

“Our starting goalie has been an absolute monster for us this year, he only played the first quarter of this game,” Head Coach Joe Abing said.

“My backup goalie came in and the team was really excited for him because he hasn’t had as much opportunity, because the guy in front of him is so good,” Abing continued.

Zachary Jenkins, the starting goalkeeper number 1 and nursing major said, “It was really fun to see him because he did really well he really crushed it.”

Nate Pineda, back up Goalkeeper number 1A and welding major, said, “Everybody played a good game, a lot of good defense.”

After the game Pineda felt “relieved, [that he] actually played [well],” and “got as many blocks as [he] did.”

John Gomez, a utility player and no. 13, said, “The highlight of the game was honestly seeing [Pineda] block his first shot, because it was a really good block, and just seeing our team get hyped up.”

Coming into the game, Coach Abing thought “[the Falcons] might be a stronger team” and “wasn’t expecting [the game] to be as lopsided as it was.”

He gives credit where he says it’s due and says his team has been working really hard at getting to the position they are in.

Captain Nik Klimpfinger, no. 5 and a computer science major, said, “I was expecting our team to play come out, play hard, you know, try to make a statement [and] show everybody in the league that we’re definitely a force to be reckoned with.

“I definitely thought in the beginning they surprised me with one of their players,” Klimpfinger said, “He definitely came out trying to score some goals but once we got it down I didn’t think too much of it.”

“My mentality before coming coming into game is to treat every game like it’s a championship game. Don’t fall short on anything, don’t treat it lightly,” Jenkins said.

Coach Abing said on Friday, the Falcons are playing Orange Coast College, and the team will be playing a very different game than the one today.

The Falcons hosted their third mini tournament on campus Friday and beat the Orange Coast College Pirates 9-8. They will play their second game against the Chaffey College Panthers at 3:00 p.m.

Their third conference game will be on Oct. 9 against Chaffey College at Cerritos College starting at 4:15 p.m.