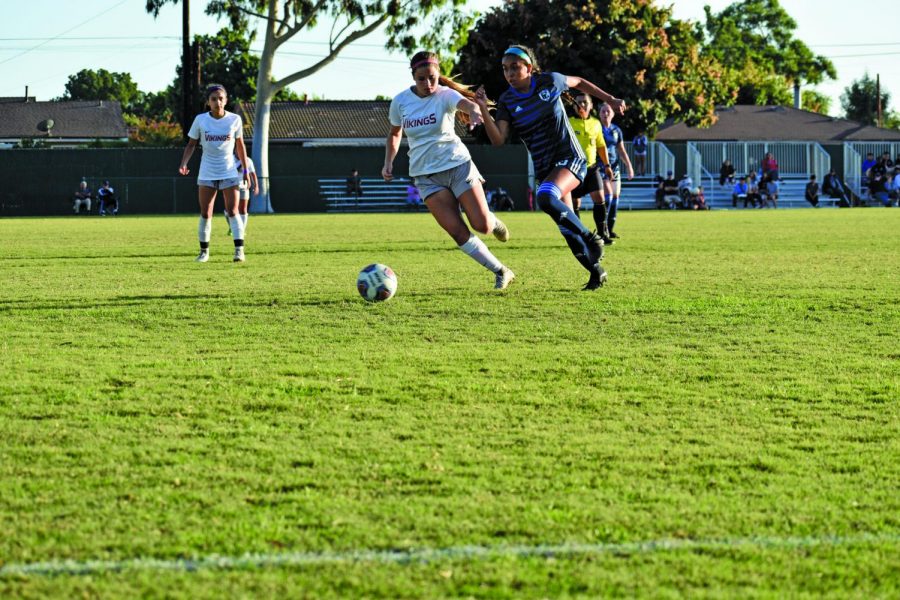 The two teams appeared evenly matched for the first few minutes, with the ball being kept largely in the midfield area, neither team able to make headway.

A shot by Sophomore Midfielder No. 10 Valeria Corrilo almost gave the Falcons the edge, missing by a mere fraction of an inch.

This wake up call prompted the Vikings to advance towards the Falcon’s goal, however a loss of possession allowed the falcons to launch a counteroffensive.

Jimenez was able to capitalize on a pass by Corrilo from the left side, launching the ball past the Vikings goalkeeper to open up the game.

The remainder of the first half went goal-less, though a shot in the 13th minute by Sophomore forward No. 13 Nia Thompson nearly gave the Falcons their second goal.

Though the Vikings made explosive bursts towards the net, the Falcons’ communication and tight defense were enough to limit the Vikings to seven unsuccessful shots on goal.

The second half saw both teams evenly matched with two saves each. The Vikings committed six fouls, and the Falcons, seven.

This created a stalemate in which neither team was able to make any significant progress towards the other’s goal, let alone score.

Serval advances made by the Falcons were stopped in their tracks by the Vikings, causing the Falcons to fall back on numerous occasions and pass the ball back and forth for minutes on end.

The Vikings were equally unsuccessful, being limited to a mere three shots on goal by the Falcons’ defensive line.

The second half saw no goals, and only one yellow card right as the game came to an end.

Following the game, Jimenez also stated, “I feel as a team we could have been better. We could have communicated more.”

“We didn’t have a really good game. We played a really good defense. We had an early goal,” head coach Ruben Gonzalez expanded, “As a coaching staff, we weren’t happy with the way we played today.”

The Falcons hope to improve as the season progresses, as Coach Gonzalez said, “We got to get better. We got to work harder. We have to continue to practice. The players need to listen to what we’re trying to do. This will be key.”

Jimenez closed with a message to her team, she said, “You guys can do more than you believe you guys can. I believe in you all equally. Let’s start on a great season.”

The Falcons will play next against the El Camino Warriors at El Camino college on Friday Oct. 11 at 4 p.m.