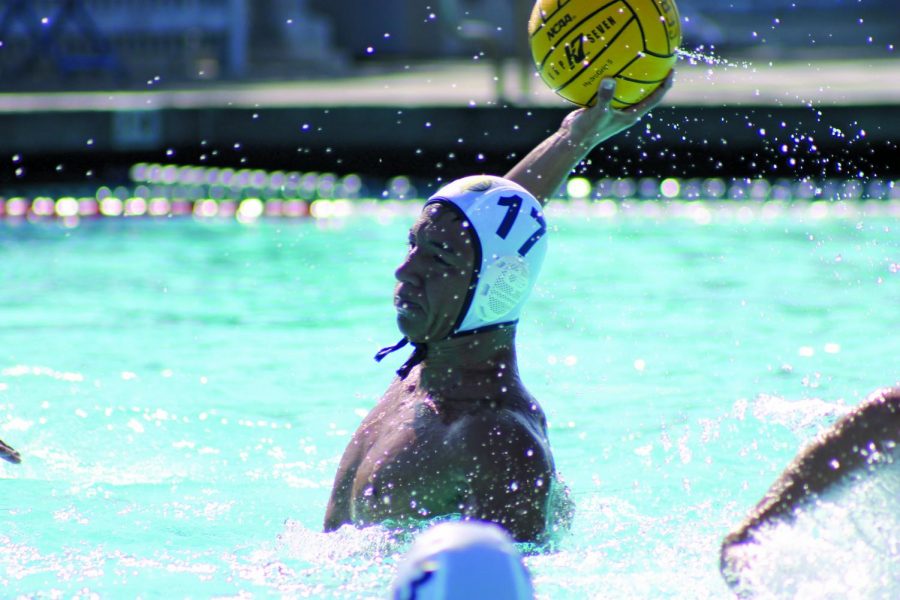 Driver: Kevin Elizarraraz No 17 scores his second goal during the 3 quarter of the game. The Falcons defeated the Orange Coast College Prates on Oct. 04 2019

The Pirates played an aggressive game and came in really powerful at the beginning of the game, but once the Falcons got their style down and adjusted their way of playing, they played a better game and got the win.

The Pirates finished the game with a total of 11 ejections–exclusionary fouls that result in a water polo player being sent out of play for 20 seconds– during playtime, versus the Falcons with only three ejections.

Kevin Elizarraraz driver No. 17 said, “Yeah we were down [and] it was bad, but coming into the fourth [quarter], we knew that we had the lead and we needed to finish [strong]. We couldn’t slow down, we needed to keep going and attacking until the end of the game.”

The Falcons took the lead towards the end of the third quarter and their defense stepped up to win against the Orange Coast College Pirates.

Head Coach Joe Abing said, “I think [our] focus was to try and help [defend] their leading scorer, No. 5. We were trying to force other guys on their team to have to take the shot.

“So the more we really helped [defend] No. 5, it allowed our goalie and our team get more stops, that strategy was working better in the third quarter,” Abing continued.

Elizarraraz, No. 17, and Brian Luque-Gutierrez, No. 4, were the top scorers of the game, with two goals each.

No. 1 Zachary Jenkins got a total of 16 saves and No. 17 Elizarraraz, along with No. 5 Nik Klipmfinger, tied at three assists during the game.

Jenkins, goalie No. 1, said, “The only thing I think we can all work on is just communication on the defensive side, it is a process.”

“We were running out of gas. I usually like to sub earlier in the game, but there wasn’t much scoring, especially in the first quarter,” Abing said, “I may have missed some good opportunities to rotate because we were getting really tired and I just needed to try and give us some breaths.”

Elizarraraz said, “Last year, we got knocked out by [the Pirates] in the quarterfinals to go to state. So we knew this was an important game we needed to show that we were obviously better this year, and we did.”

Driver Rodrigo Baca, no. 14, scored the game-winning goal that put the Falcons up to nine goals and led them to win the game.

Coach Abing created this mini-tournament at Cerritos College because the team travels a lot and it is an opportunity to have more home games for more family members students and friends to come see the team.

The Falcons played the Chaffey College Panthers for their second game of the tournament and defeated them 20 – 6.

The Falcons will play against the Panthers again on Oct. 9 in the Falcons’ third conference game of the season on campus at 4:15 p.m .