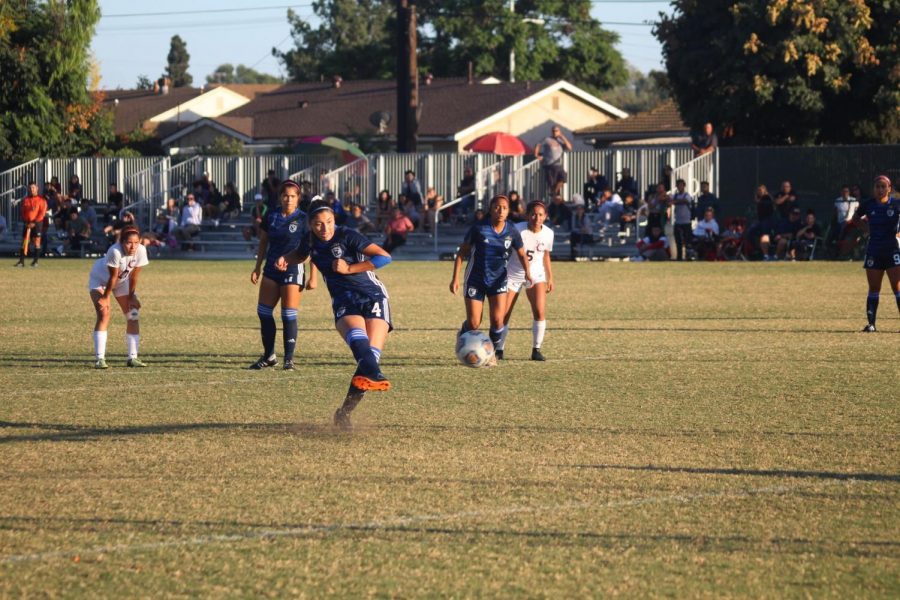 Freshman midfielder/defender No. 4 Alessandra Ramirez scored with a penalty kick in the second half. Tying the game 2-2.

The Cerritos College women’s soccer team tied with Compton College’s Tartars in both the first half and the second half of the game to end it with 2-2 on Oct. 8.

The Falcons have been crushing it this soccer season, with first goal of the game made by Falcons’ freshmen forward No. 23 McKenzie Cooper at the 16-minute mark.

Heading towards the halftime at the 31-minute mark, Compton tied the game with a free kick by sophomore midfielder and defender No. 28 Carolina Martinez.

As the suns sets down, both teams were playing at the same level and so close to the net. Both teams missed a couple of open shots quite a few times.

Despite their fierceness, Falcons were losing their connection as a team and with the ball, with the first half of the game ending with a tie score of 1-1.

Tensions were at an all time high when Compton’s defense became intense with the ball leaving the Falcons behind in the second lead.

By the second half of the game, Compton gained the lead with midfielder sophomore No. 10 Jenifer Lopez scoring 2-1.

As the crowd was cheering for Compton’s result, Ruben Gonzalez, head coach of Cerritos College women’s soccer team, looked concerned for their position.

Towards the 70-minute mark, Cerritos College rose above with their energy and turned up the heat when freshmen midfielder and defender No. 4 Alessandra Ramirez kicked the ball into the penalty box and a handball was called on Compton.

Ramirez was then given a free penalty kick and was able to tie the game 2-2.

With regards to their strengths, Ramirez said, “Our strengths would be our long balls, and being aggressive on the field, as well as our communication.”

Cooper who made the first goal for Cerritos stated, “We had a lot of long balls and connected to the forwards lot.I just think our weakness is the final third we always take one too many touches, but I think we’ll eventually get there.”

Cooper went on to say in hindsight or an overview of what could be improved on as a team, “When we’re up top, being quicker with the ball and connecting more, and not taking too many touches.”

Head coach Ruben Gonzalez stated that the team had a poor performance.

“Honestly today I don’t think we had any strengths, we didn’t deserve to even tie, we just didn’t come out with any effort, fortunately, we were able to score 2 goals to tie but I think we did a poor performance today”,stated Gonzalez.

The Falcons are to play at home on Oct. 18 against Pasadena City at 4 p.m.