Falcons lose to Lancers but not without a fight! 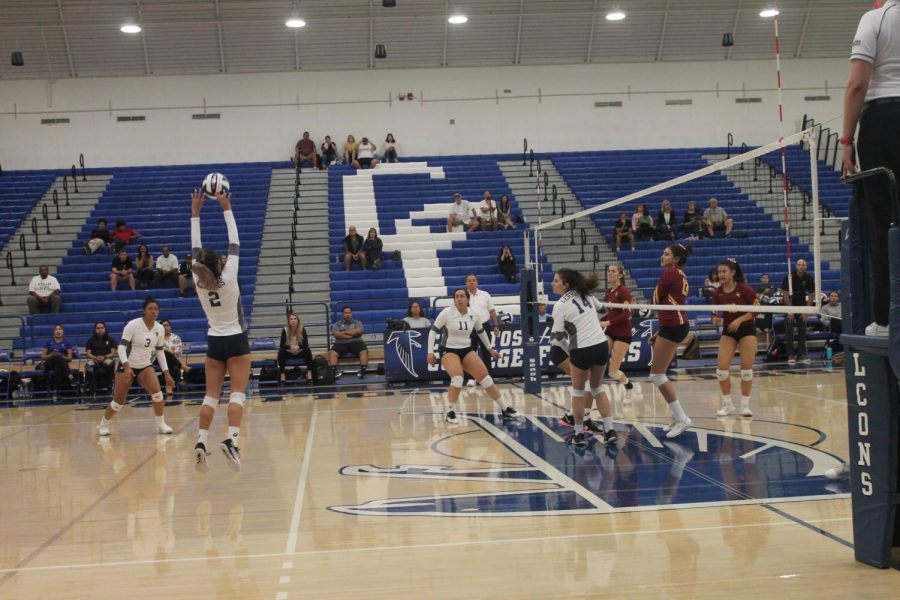 Mirka Granoble, Sophomore setter No. 2 jumps high as she passes it to her teammates. Photo credit: Karen Miramontes

Cerritos College volleyball team took another loss from Pasadena City College on Friday Oct. 11 but not without a fight, extending the game into an intense five sets in their South Coast Conference match.

Everytime Cerritos played “catch up” against Pasadena, the Lancers kept blocking their kills.

However, with a few time-outs and a couple of different strategies, this only fueled the Falcons into doing better and committed to defeating the Lancers.

This really made the third set into an intense game, leaving sports fans on the edge of their seats.

After a few alignment adjustments, the teams were tied nine times until the game reached with a score of 20-18 giving the Falcons an edge.

They received a service error point, followed by a service ace from, Marissa Reyna, Freshman libero No. 27, to tie the set at 20-20.

After that, the Lancers scored two points but their confidence was short lived once Cerritos got a kill from Reyna and an ace from, Mirka Granoble, Sophomore setter No. 2, with a 24-22 advantage.

Lancers tied the game with 24-24 but the Falcons got a point back on a Blohm service error, while an attack error secured the third set giving them a score of 26-24.

Cerritos came out strong in their fourth set leading up with a score of 15-12 until Pasadena City scored the next five points before a pair of Alexia Torres, Sophomore outside hitter No. 13, kills tied the set at 17-17.

Lancers made three points in a row countered by a pair of attack errors before Jackie Dixon, Freshman outside hitter No. 5, and Granoble shared a block to tie the set at 20-20.

Tensions were running high as Pasadena City’s Paulina Lopez put them one point away from the match, until Granoble caught them off guard with a kill from the setter and was followed by a Torres kill to send the match to a fifth set.

It seemed like there was hope for the Falcons to win their fifth set, however, the. ladies struggled with their serve reception during the match which led Pasadena City winning the night by 8-15.

Coach Kari Hemmerling, commented, “I believe the game started off a bit slow so we had to mess around with the lineup. We tried a few different things and we were able to turn the game around.”

“We need to improve on our consistency, making smart plays instead of trying to be the hero,” Coach Hemmerling adds.

Torres stated “We started off rough but after the third and fourth match we caught on but by the fifth match we fell short,” she adds, “We need to improve on communication, our passers don’t talk much so I think it’s important that communication and teamwork would help us succeed.”

Dixon also agreed that in the beginning they started laggardly but gradually rejoiced together during the third and fourth set.

“We need to come out strong in the beginning and being able to close the game, even if we’re down we still gotta bring it back up no matter what,” Dixon stated.

Dixon expressed optimism that they are going to win the next game, which will be on Wednesday Oct. 16 at 6 p.m. against Rio Hondo College.