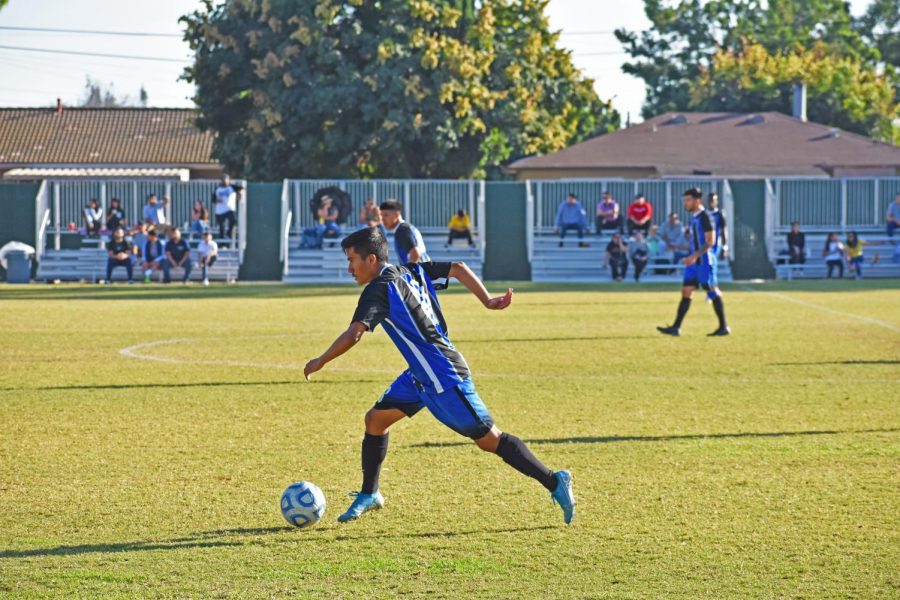 Defender Jorge Cardona, 18, pressures the ELAC defense. The Cerritos offense controlled the flow of the game with nine shots on goal to the ELAC one.

The Cerritos College Falcons men’s soccer team remain undefeated for 39 matches in a row with their close win against East Los Angeles College on Tuesday afternoon.

However, the score doesnt match that of their previous encounter with East LA College, which ended in a 7-1 victory.

“Last year we beat them 7-1,” said freshman defender No. 27 Adrian Gonzales, “and then this year to just beat them 1-0 is kind of disappointing.”

The Falcons had a strong start and lead in shooting with 14 shots versus the Huskies’ three shots attempted during the intense first half of the game.

In the seventh minute, one of those shots pulled through as a goal when sophomore defender No. 3 Ernie Cueva passed the ball to sophomore forward No. 7 Kevin Diaz to score, which ended up being the sole and winning goal of the game.

The Falcons continued to attempt to score goals but to no avail as many were missed and some blocked by goalie Oscar Ponce and the oppononent’s defending players.

Sophomore defender No. 3 Ernie Cueva suffered a minor head injury at minute 29 and the medical team made sure that he suffered no lasting damage before letting him sit out for the rest of the game.

At minute 37, it seemed as though the Falcons had scored another goal, but the referree ruled that sophomore forward No. 11 Bryan Villalobos was offside.

The first half ended with 11 cornerkicks awarded to Cerritos College, and 4 fouls committed by East LA College.

At the start of the second half, the Falcons struggled to keep up with their earlier performance as they only attempted shots 8 times, while the Huskies increased their attempts to 5 with more time spent on their side of the field than the previous half.

While Cerritos College had possession of the ball for a majority of the game and was successful in keeping their opponent from taking control, the team was not able to score another goal.

The Falcons increased their number of fouls committed against East LA College as they battled against their opponents’ particularly challenging defensive tactic, which lead to a match of being persistent and working hard to stay on top.

“They sat back a lot and put 11 players behind the ball, so it was pretty hard to break them down,” said sophomore midfielder No. 13 Dominic Valdivia,”so i think our objective was to get it out wide and they played hard, but I think we were definitely the better team.”

Head Coach Benny Artiaga noted that his team did not perform the best that they could and said “It’s always difficult when a team defends you with 11 behind the ball…I dont think our team had a killer instinct or a correct mindset to put the team away… [improvement] has got to start with our mindset.”

The game ended with a victory, but the players left the field determined to improve.

The next match will be at Los Angeles Harbor College on Friday, Oct. 18 at 3pm.