Falcons shut out the Huskies 2-0 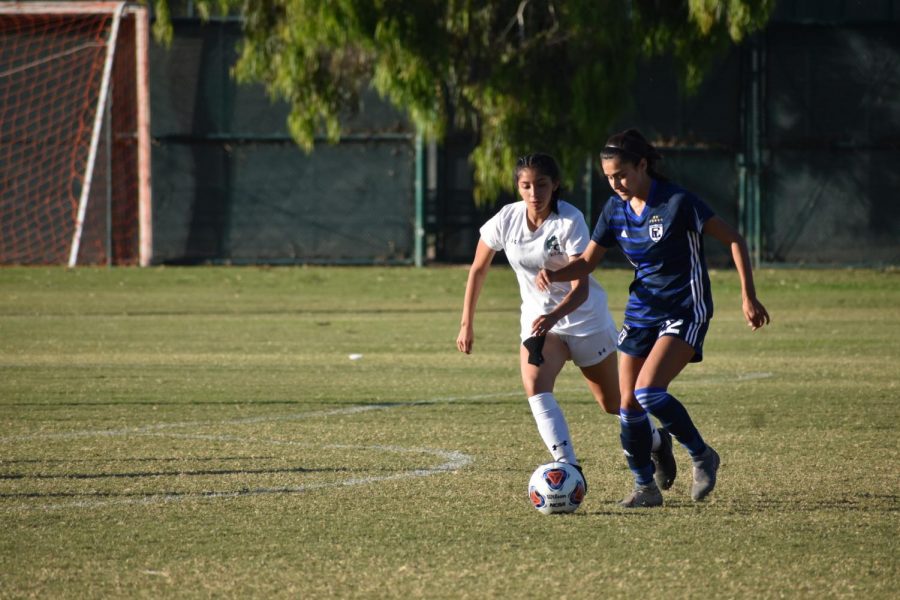 This win for the Falcons brings their record to six wins, three losses and two draws; Their third shutout in their past five games.

The Falcons scored in the 27th minute, as freshman forward Samantha Martinez threw in the ball to the direction of sophomore forward Gabriela Jimenez who headed the ball over the East Los Angeles freshman goalkeeper, Anahi De Leon.

This was Jimenez’s fourth goal of the season.

Jimenez on her game leading goal said, “It feels like another goal that we needed. It does not feel more special than other goals, but I felt I needed to go out of my way to score not only for myself, but for my team.”

De Leon led the game in saves with a total of 12. De Leon was constantly contested with powerful shots while Cerritos freshman goalkeepers Liza Cisneros and Melanie Corona were very rarely contested with any shots.

Cisneros had the only save of the game for the Falcons.

The Falcons took 24 total shots, 14 of them being on goal. The Huskies on the other hand, took one shot total, the only shot being on goal.

Head Coach Ruben Gonzalez on the team’s performance stated, “Not very good overall, but we got the win. We could have performed better than we did. Some things we can improve on can be communication, effort, and overall just wanting it [the victory] more.”

The second goal in the shutout for Cerritos came from freshman forward McKenzie Cooper who hit a stunning curling shot from outside the box. This was Cooper’s third goal this season.

Cooper on the teams overall performance said, “I think we connected pretty good, I feel we played well as a team. Something we can definitely improve on is faster decision making.”

The Falcons dominated in possession as the offense pushed forward attempting to score throughout most of the game, leaving the Falcons defenders to uncontested most of the time.

In the 90 minutes, the Falcons had 10 fouls, while the Huskies had five.

In the second half, the Falcons moved the ball around well and took multiple shots towards the goal, but ultimately could not enhance their lead. Many shots went off the post, while many others were blocked by the Huskies goalkeeper.

The Falcons have now won four out of their last five games, the only other draw against the Compton College Tartars. They will now go on a three-game road trip.

After the match versus Los Angeles Harbor, the Falcons will start playing against their conference rivals beginning with Pasadena City on October 18 at 4 p.m. at Pasadena City.