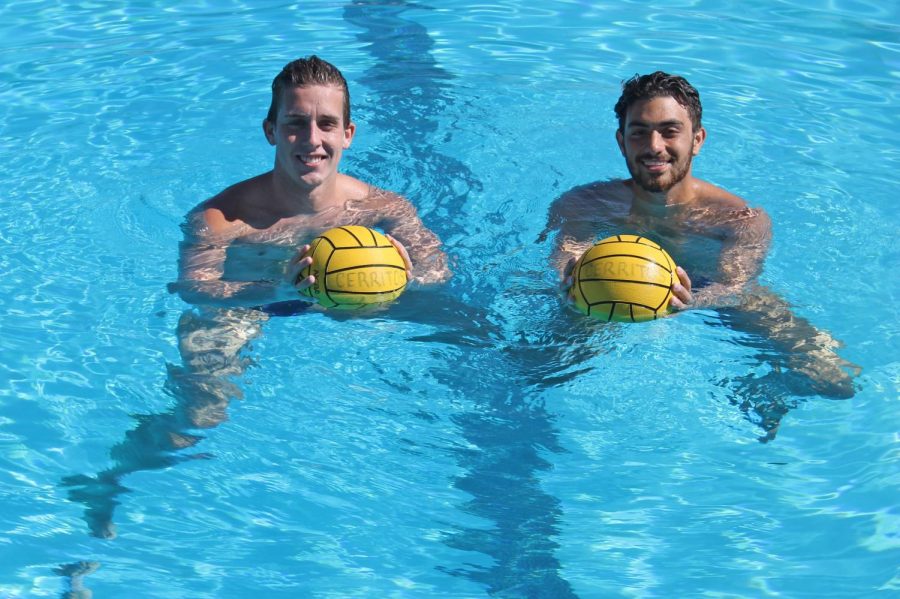 Zachary Jenkins (left) and Nathan Pineda (right) after a recent practice, they both continue to work hard for the next upcoming game. The next game will be held Oct. 23, 2019 against Mt. San Antonio. Photo credit: Derrick Coleman

The Cerritos College men’s water polo team is having a great season, remaining undefeated in conference 3-0. Two athletes who the team tremendously respect are the starting goalie, Zachary Jenkins, and the backup goalie, Nathan Pineda.

“During the beginning of practice, I’m getting the rest of the team warmed up and they’re very self-disciplined,” Abing said, “They are very capable of leading themselves in different drills.”

The starting goalie Jenkins, nursing major, is finishing up his final year at Cerritos College and is hoping to continue playing after his two-year mission with the Church of Jesus Christ of Latter-day Saints following graduation.

Jenkins was introduced to swimming and water polo at age 11.

“I started doing club swimming when I was about 11 and they also had a water polo team,” Jenkins said, “They were scrimmaging one practice [while] I was swimming in the same pool and they said, ‘come we need an extra player.’ So I joined it.”

Jenkins said the most memorable moment in his water polo career so far was when he was named the CIF Player of the Year and California-Hawaii All-American during his senior year at La Serna High School.

During his high school years, his team’s goal was to make it to the finals every season. During his freshman and sophomore year, they made it semifinals and junior year to quarterfinals.

It wasn’t until his senior year they finally made it to finals and won the title.

“That was a real milestone for me in my water polo career, my team always tried to win CIF,” Jenkins said. “For the whole season, I played my hardest and I guess I played hard enough to be able to be named the CIF Player of the Year and getting all American which was a real confidence booster for me.”

Pineda had a different exposure to water polo than Jenkins. Going into high school, he wanted to go into a sport. Basketball was a first choice, but he figured it was all about politics and money.

Pineda said, “Me and my friend were walking down the hallway and decided we were going to sign up for a sport. It was water polo, so we just signed up and stuck with it.”

During junior year of high school, Pineda earned second-team All-CIF honors and was granted the team’s best defensive player when he finished his water polo season, with 262 saves beating his school’s previous record.

“I currently hold the school’s [La Mirada] record. Nobody has beat it, that’s like my proudest achievement,” Pineda said.

In his senior year at La Mirada High School, Penida beat his own record after recording 375 saves at the end of his season and was voted his team’s best defensive player for a second time.

He became known as Nate “The Wall” Pineda around school after beating the school’s record of saves.

Pineda he spent his 2018 water polo season with the Falcons as a redshirt, but came in strong this 2019 season.

“Last year Nathan was a redshirt, so Nathan would only practice last year, but he is one of the most improved players on the team,” Coach Abing said.

They want to play because they like it not just for fun, like some people do in high school. It makes the games more intense providing a different experience.