Falcons miss out on playoffs with loss to Mt. Sac Mounties 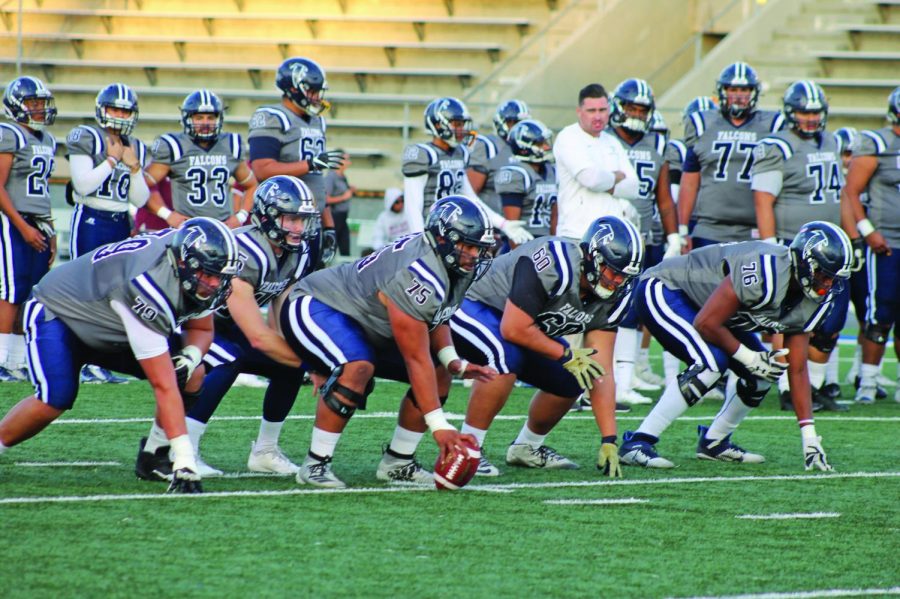 Quarterback prepares with the offensive line in front before the ball is snapped. The Falcons run drills before the homecoming game on Nov. 2, 2019.

The Cerritos College Falcons football team lost a tough homecoming game versus the Mount Sac Mounties, failing to make the playoffs with a 1-2 conference record.

The Mounties opened the game quickly, turning their first drive into a touchdown. While Cerritos responded with a drive of their own, they failed to materialize a touchdown of their own, settling for a field goal.

The Mounties continued to control the first half with an additional two touchdowns and a field goal to end the half with a 23-3 score line, in their favor.

Falcons special teams limited the Mounties’ scoring with a blocked field goal, but the Falcons defense could do little to stop the Mounties pass game. A skillful interception by Strong Safety Keeville Brown (#4) was a highlight for the Falcons defense in the first half but the following offensive drive failed to create any momentum.

With the start of the second half, the Falcons found more struggles. A short drive led to a failed fake punt attempt which put the Mounties in position to score again, this time with a long, setting the score at 30-3. The struggles continued as Falcons Quarterback TJ McMahon’s pass is intercepted in the endzone by the Mounties defense.

The Mounties were forced to punt back, however, leading to the first Cerritos touchdown drive, with Running Back Carl Odom closing the push with a one-yard TD run. With the score now at 30-10, the Mounties were quick to respond with a steady drive up field for another touchdown. Missing the point after kick put the game to a 26-point differential, 36-10.

The Falcons weren’t quitting though, A nine-yard touchdown run by Running Back Jacobi Hardy set up Cerritos for a potential comeback, putting them within striking distance. Despite an illegal substitution flag against Cerritos, pushing back the kicking position, Cerritos converted the PAT, settling the score at 36-17.

The Mounties marched their way past midfield only to fumble the ball on a run play with the Falcons recovering the ball on their own 43-yard line. The fumble recovery allowed the Falcons to push down into the Mounties’ redzone. After the pocket collapsed around him, Cerritos QB McMahon ran the ball in for a touchdown, tightening the game to 36-24.

After a stunted Mounties drive, only 01:25 remained on the clock for the Falcons to work with. Cerritos’ three pass completions in a row set a blistering pace for their potential comeback run, helped along by Freshman Running Back Hinckley Ropati’s 20-yard run play and eight-yard run for a first down.

After one incomplete pass, Cerritos QB McMahon connected with Wide Receiver CJ Parks for a first down only to have another incompletion show that only 19 seconds remained in the game. Another pass completion set the Falcons on the Mounties’ 14-yard line with only seven seconds left. Another incomplete pass put them behind even further, with a third down and ten yards to go with four seconds left spelling the end for the Falcons. the Falcons went for a final pass play to end the game. Heartbreakingly for them, Mt. Sac intercepted the ball and ran 96-yards back for the game ending Mounties touchdown, putting the final score at 42-24.

This tough ending was a culmination of a struggle-filled game. Both teams were plagued by penalties, many of them dead-ball personal fouls, highlighting the chippy nature of the competition. The Falcons did have a solid run game with Running Backs Hinckley Ropati, Carl Odom and Jacobi Hardy all putting up solid performances, netting 233 yards collectively.

Defensive Lineman Anthony Shipton after the game said the defense “could’ve come out smacking” but they played “all in our own heads.” Despite this, Shipton says “We have to comeback stronger next week” when the Falcons play Palomar, their final home game of the season, on Nov. 9 at 6 PM.