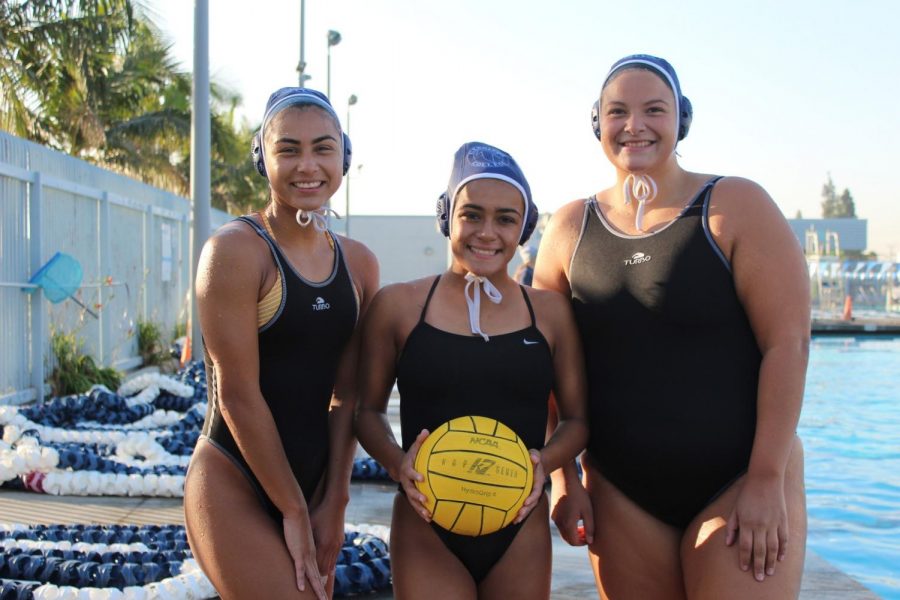 Some of the leaders behind the women's water polo team. They come from different introductions to the game of water polo, but once they are in the water they are a great force. Photo credit: Luis Lemus

Winners are born. Some are groomed.

It doesn’t matter how the victory is obtained; all many care about are the results. Some members of the women’s water polo team fit this mold, driven by the prospect of a win, and working their hardest to achieve that goal.

Currently sitting at 16-6 overall while remaining undefeated at 6–1 in conference play as of Nov. 1, this team is sitting in the number two spot of their division’s leaderboard.

When getting out of game mode and having an opportunity to catch up with some of the players, some of the team spoke about how they came into the challenging sport that is water polo.

Mia Carbajal, attacker position No. 13 and freshman kinesiology major, said she has been playing the game for about eight years.

To Carbajal, the biggest difference for her between competing in high school games versus the college games is that in high school, they only have seven minutes per quarter and here in college, they have eight minutes.

Gabriella Arenas, No. 10 freshman center, out of Montebello High School, gave some insight into the beginning of her water polo career and her playing history.

Arenas said, “When I first started, one of the girls from the varsity team told me just to try out [for water polo] because I was just swimming.

“I just tried out and I didn’t know what the sport even was. I was just always in the water. I took lessons at the [YMCA] swimming [pool], so with water polo, it was just mixing the two together.”

Arenas said she likes the physical contact required in water polo and everything else about it.

Like Carbajal, Arenas believes the biggest difference between high school and college water polo is the time allotted for each quarter.

High school matches last six minutes, whereas at the college level they last eight. This change may seem small, but with the exertion that accompanies the sport, two minutes can drain one of their energy.

“There, the shot clock was only 30 [seconds] and here, it’s 35. I think it just feels a lot longer here, so I definitely do get tired a lot so I had to adjust really quick.

“I definitely like it’s a lot more physical here than high school too,” Arenas said.

Mayra Olivas, sophomore No. 4 and an attacker on the team, said she started off swimming in a swim club and they started to introduce water polo.

“I sort of got pushed into the sport and it’s been fun ever since,” Olivas said, “It’s something new, a little different. It’s something that a lot of people can’t really play.”