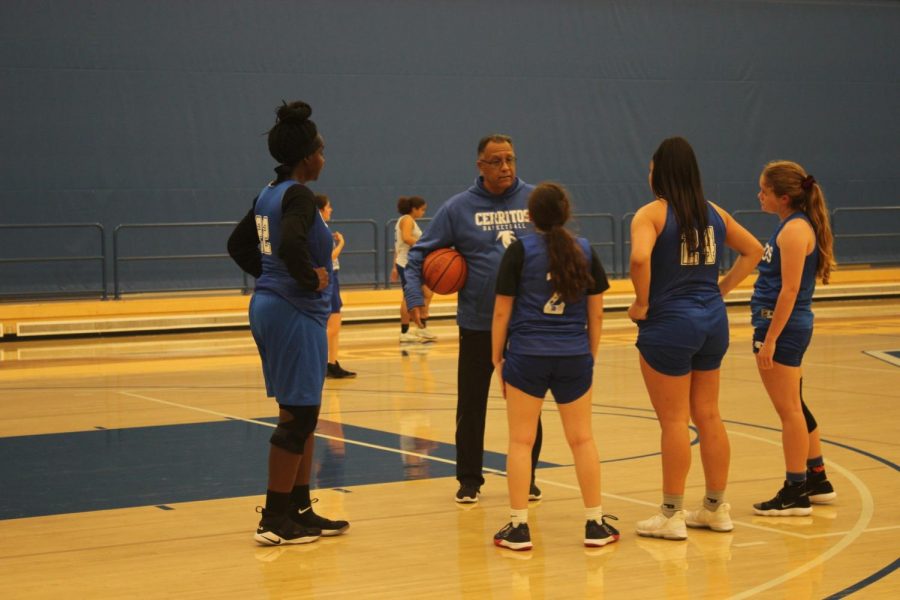 Rallying the team: Coach Joe Pacheco, motivating his team during practice. The women's basketball team is looking forward to an excellent season, and hopes to continue racking up victories with each passing game. The team next plays against Golden West College in a home game that takes place on Dec. 18, 2019. Photo credit: Quinae Austin

The Falcons started off the 2019-2020 season struggling and losing four of their first five games. They then picked up the pace and won three in a row, currently sitting with a 4-4 record with many more games to come.

We interviewed Trisha Kozlowski, Women’s Basketball Head Coach, and some Falcons to get a sneak peek on what to expect from the Falcons this season.

Sophomore Basketball Player, Madison Kane, Kinesiology Major, believes, “In order to achieve another championship we need to work hard, play as a team, and understand that no one is best by themselves, keep staying positive to have that good energy on the bench.”

Kozlowski led the Falcons team last season in which they ended the season with a promising 21 wins and 11 losses.

From what she has seen this season, after being asked who she thinks will lead the team this season, Kozlowski states, “We’ve had eight games so far and statistically Sarah Hernandez is leading us in scoring and rebounding. Mariah Lora is leading us from the point guard spot and Freshman Precious Yerena, Jordan Lewis, and Melanie Lopez are contributing on both ends of the floor. Kayla Sta Ana and Nicole Lizarraga will also give us added versatility.”

Sophomore Mariah Lora, English Major, when asked about the importance of her balance with her teammates, said, “As captain I understand that not everyone learns the same, so coaching is personal and that is really important in order for us to get wins this year.”

Based on the improvements she has seen, Kozlowski claims, “We’ve had three overtime games in this short season and the team has continued to work on execution in end of game situations.”

Kozlowski believes her team has the heart and dedication to win games. She says, “We are a hard working group and the players enjoy being on the team with each other. We’re a group of fighters andI’m proud of our daily effort in practice and our resiliency in games. I know this will give us an opportunity to compete with all opponents this season.”

The women’s basketball team consists of Trisha Kozlowski as the head coach, and Joe Pacheco and Monty Washington as the assistant coaches.

Pacheco tells his team, “Respect your opponent but don’t fear them.”

The Cerritos Falcons Women’s Basketball team will continue their season against Golden West College at Cerritos College on December 18 at 5 p.m. They are currently averaging 60 points and 38 rebounds a game.

The Cerritos Falcons Women’s Basketball season is finally upon us and the Falcons plan on continuing their winning ways from last season and potentially compete for a championship.