Off the Field: The significance behind professional gaming 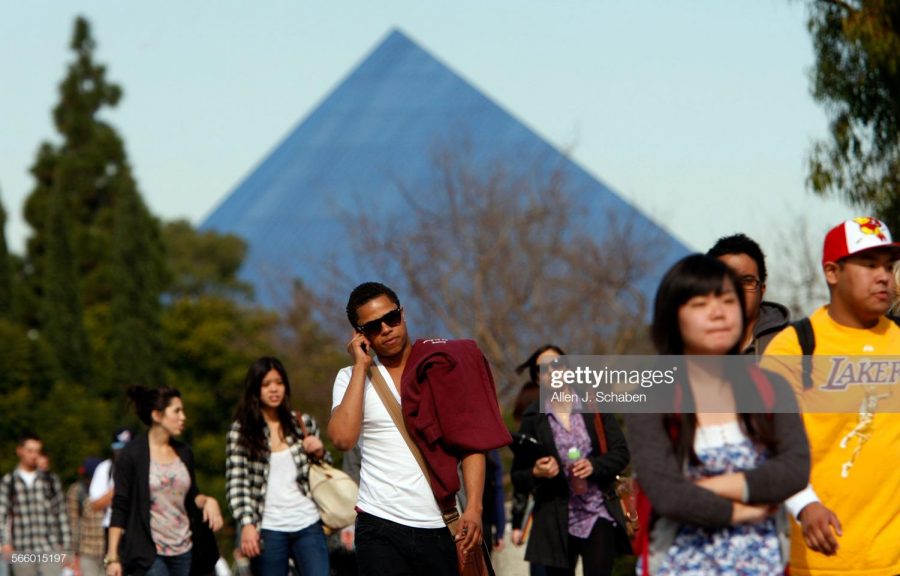 LONG BEACH, CA JAN. 26, 2011 Students at Cal State students walk to and from class with a view of the Long Beach Pyramid in the background.The annual national survey of college freshmen finds students feeling more stress in both their academic expectations and their financial situations. But the "American Freshman" study, conducted by UCLA's Higher Education Research Institute, also found that new college students are generally optimistic about their college experiences and hope to get a lot out of them

Through power supplies, RGB keyboards and motivation, CSULB e-sports members show how they are taking the idea of sports off the field and onto the screen.

Matthew Akuino, co-coach and co-manager of the CSULB e-sports team, explained that competitive gaming requires the same amount of effort, focus and training as other known sports, such as soccer and football.

“Yeah physically it’s different [than sports], but the mental stress is still there,” he stated.

Hayden Matheus, CSULB e-sports League of Legends branch manager, agreed and stated that pro-gamers have to train just as long as traditional athletes to attain mastery in their game.

“Pro players have to stay physically fit and healthy to maximize performance in game,” he explained. “The games themselves are highly competitive and require very coordinated and skillful actions.”

Akuino explained that the training process for competitive gaming includes dedicating time to playing the game and creating strategies in order to outplay the opponent.

This includes planning team compositions ahead of time so that the team is never caught off guard.

For example, in the popular game League of Legends, certain characters might objectively counter others. So it would be in the team’s best interest to choose those that counter the opponent’s, or choose a character that is not easy to counter against.

Akuino stated that although America sees professional gamers as entertainers, the career is taken seriously in other countries such as Japan and Korea.

However, Matheus believes in the importance of professional gaming as a sport.

He explained that the sport has a low barrier to entry, being open to anyone including the young, old, and those with disabilities, and is productive because the games train a person’s brain to develop problem-solving and critical thinking skills.

The 2 gamers agreed that the sport also brings a vast community together, and is what led them to meeting many new friends.

“The significance of esports is bringing the community together,” Akuino stated. “You can always play by yourself, but that’s no fun.”

“I’m extremely lucky and grateful to have found the friends I did through collegiate e-sports because without them, I wouldn’t be the person I am today,” he added.

According to Akunio, CSULB esports is currently placed first in the nation for Rocket League and competes in other games such as League of Legends, Rainbow Six Siege and Counter-Strike.

The e-sports team is open to all CSULB students, although local gamers are welcomed to help coach and keep the team successful.