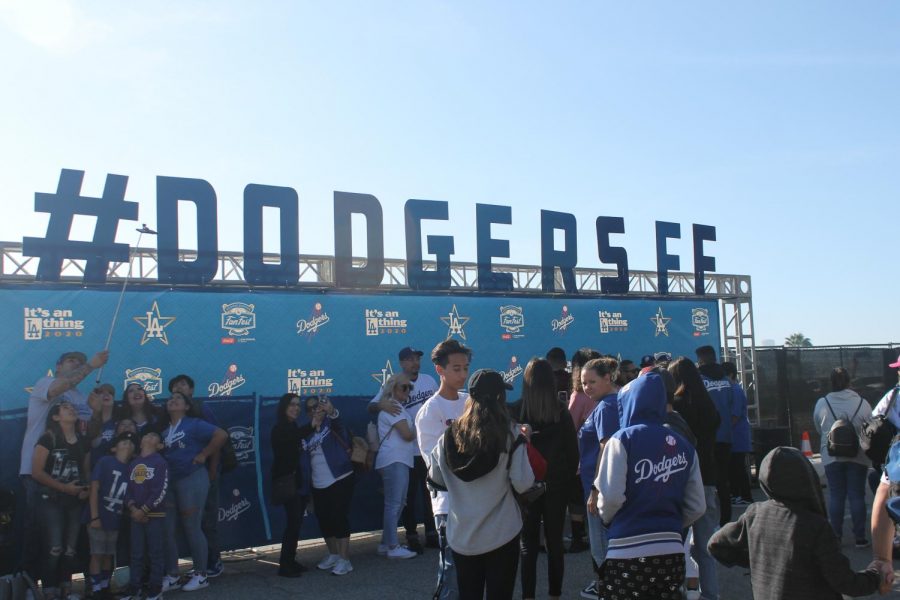 Many fans attending the Dodgers Fan Fest stop in front of the selfie station to take their best selfie. Dodger stadium hosts all fans for the event on Jan. 25, 2020. Photo credit: Luis Lemus

Fans participated in the many free activities offered to the public including autograph opportunities from Dodger players, batting cages, rock wall climbing, and carnival games among others.

While the fans enjoyed the event and participated in all the activities presented to them, they all had one thing in the back of their mind: The 2017 World Series.

Never mind the fact that the Dodgers were eliminated in the opening round of playoffs in 2019.

After the league concluded the findings and had issued penalties to the Houston Astros, they told the Dodgers to steer clear of remarks on the 2017 World Championship scandal and to keep quiet according to baseball reporter Ken Rosenthal in a January 24, 2020 Tweet.

Ashley Sanchez of La Puente says “I am excited to be back at the stadium but I definitely want to hear from the players.

The hot-button issue could not be avoided no matter where you turned, but being allowed access inside the stadium was a nice refuge area.

In preparation for the Dodgers hosting the 2020 All-Star Game, fans welcomed the sight of construction just beyond center field. The LA Dodgers haven’t hosted the game since 1980.

The concession stands were open for business, with both past-favorites, including a vegetarian stand, and newer ones such as the Barrilitos Cantina, offering treats like horchata or perhaps a michelada.

They had a long zigzag-line of fans waiting for a chance to purchase giveaways given at turnstiles during the 2019 season. “Mystery bags” with unknown goodies were also available to be purchased if one was willing and patient enough to wait.

The bobble-heads were also taking pictures with fans both young and old. Stopping at every opportunity to take a selfie with the giant “bobblers” is one that most people can’t pass up.

On the stage, located in the top deck, interviewing some of the players were the Dodger’s beat reporter for the MLB network alongside Dave Vassegh, the host of “Dodger Talk” on AM570 giving post-game analysis.

“They cheated and they got away with it,” Hernández said. “I don’t think it hurts more now than it did three years ago when we lost the Series.”

He finished off by saying that the Dodgers were warned about the Astros.

“Everybody warned us,” he said.

“A lot of people told us to worry about them [the Astros]. We thought it was just rumors, but I guess not.”