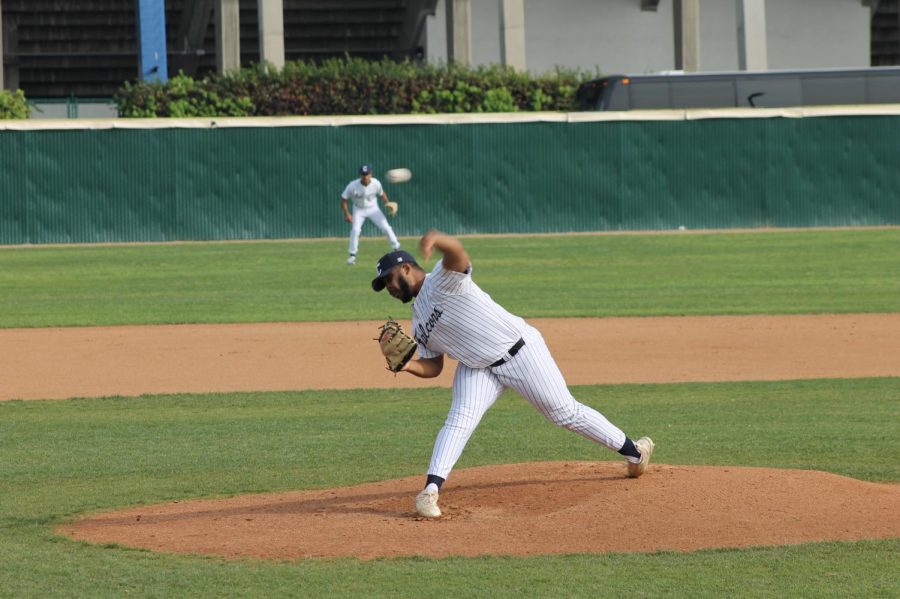 The Cerritos College baseball team won their first game of the 2020 season against the Fullerton College Hornets on Jan. 24.

Freshman David Hays allowed one hit by the Hornets’ lead off batter, only to allow zero more in eight total innings. Hays velocity stumped the opposing line-up, earning a total of 10 strikeouts. Defensively, the Falcons backed up their pitcher by taking advantage of opportunities to make plays, preventing any Hornets from crossing home plate.

The bottom of the 1st was kicked off with lead off hitter, Buck Anderson, firing a line drive leading to a triple. Points were quickly put on the board thanks to a follow-up double from second baseman, Andres Vega. By the end of the first, Cerritos had 2 runs and high energy.

Their momentum persisted throughout the game with the Hornets unable to overcome Hayes’ pitching and the Birds’ continued success at bat. More runs were scored in the 4th, 5th and 7th innings, and Hays was not relieved until after the 8th, where Andy Hurtado closed out the victory.

Fullerton’s defense was challenged with constant pressure from Cerritos bats, earning only two strikeouts by the 5th inning and accumulating three defensive errors. The Hornets interchanged five different pitchers throughout the game, but even that could not make up for their inability to score runs against Hays.

For players and coaches, Friday was the game to make their debut in this Cerritos baseball program.

First-time Head Coach, Vic Buttler was quick to attribute this win to all the hard work done at practice.

“I have a coaching staff full of professionals, I couldn’t do this without them.”

In a recent interview with Talon Marks, Coach Vic explained his instillment of ‘team identity,’ and how it encourages his players to focus in on their own abilities and use those skills to contribute to their team.

For Friday’s game, Coach Vic was happy to see team identity in action. “Each player played their role,” he said. “The camaraderie and the team-togetherness and is what I love to see from this team.”

This is also David Hays’ first win and first game with in a Falcons uniform. David Hays pitched through eight innings which was longer than some spectators expected. After the game, it was revealed that Hays felt like he could give more good innings, and asked his coaches to remain in the game.

“These guys are good hitters, but I thought ‘who wants it more?’” says Hays, “This is my first start and first college game so I said I’m gonna give it my 100%.”

Center fielder, Buck Anderson led the team with three hits and was making his own debut as a Bird since coming from CSUB. “It was a great team win today,” he said , “I think it was a perfect representation of what we want to be and a perfect way to start the season.”