Men’s basketball gets back in the winning column; beating LA Southwest 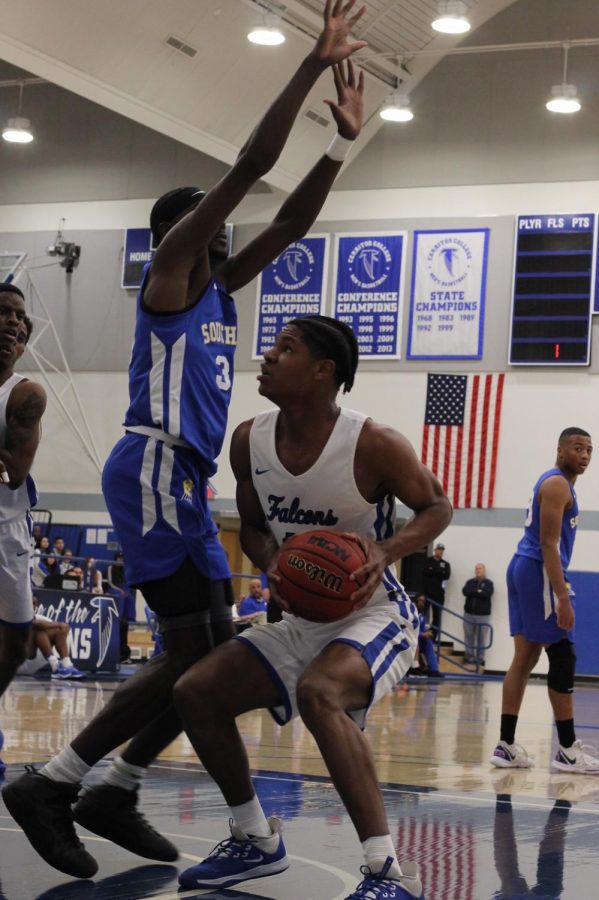 Jaishon Forte, forward No.11, prepares to take a shot against LA Southwest. The Falcons beat the Cougars on February 5, 2020. Photo credit: Derrick Coleman

The Cerritos College men’s basketball team won their South Coast conference match against LA Southwest with a score of 64-59 on Feb. 5.

This win for the Falcons breaks a three-way tie between Cerritos, LA Southwest and Long Beach City College for first place in the conference.

The Falcons held off an admirable Cougar squad in the last minutes of the game, where both teams were going back and forth at each other, scoring jumpers and three-point shots.

At one point in the game, it seemed Cerritos would go on and win comfortably as they held a 12-point lead with eight minutes left in the game.

However, the Cougars came roaring back and closed the gap to within one point, with about two minutes left in the game.

Cerritos’ defense managed to keep Southwest at 59 while the Falcons were able to make four free throws to extend their lead by five.

Falcons head coach, Russ May, shared his thoughts on the game in those last minutes.

“They [LA Southwest] made some good plays down the stretch and we didn’t finish a couple of plays and took a couple of quick shots when we didn’t need to,” May said.

May was proud of how his team played defensively in the first half, holding down the Cougars to just 22 points regardless of the defense giving up a comfortable lead in the game.

“I didn’t think they [Cerritos] played sloppy. Our defense was great. We held them down to 22 points in the first half,” he added.

Freshman point guard, No. 2 Joshua Belvin, made two clutch free throws in the final seconds of the game to secure the win for the Falcons.

Belvin explained the game plan going into the game, along with mentioning how he and the team needed to do a better job on defense.

“LA southwest has a lot of shot-blockers and athletic bigs so we try to get them in foul trouble and get them out the game,” Belvin said.

Belvin also thought the offense played well and said they got the shots they wanted.

Sophomore center, No.21 Daelyn Bams, also thought the offense played well and executed their plays on offense and zones on defense.

“We did pretty good, we were moving the ball pretty well and we were solid on defense,” Bams said.