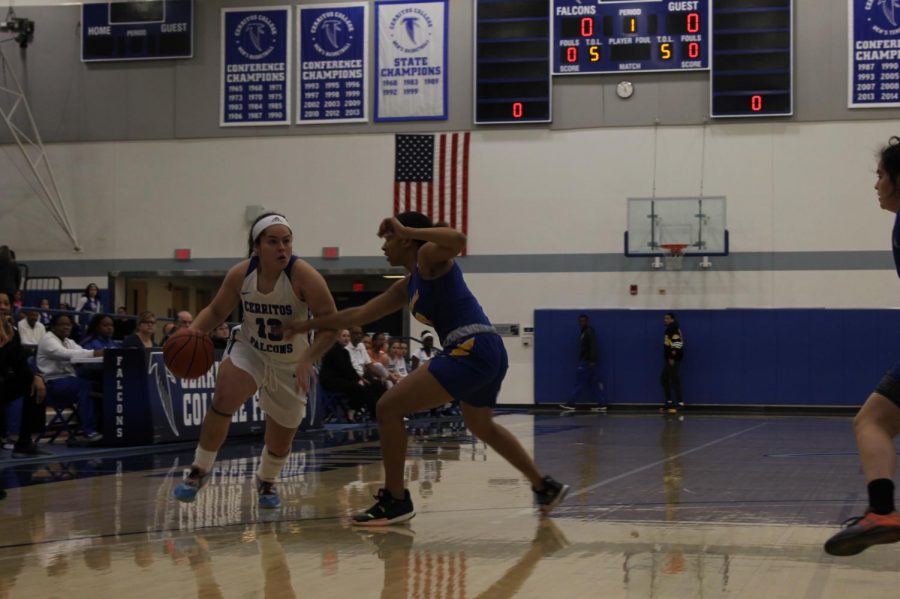 Sarah Hernandez Guard 13, drives the ball to the basket from the three point line. Against LA Southwest on February 5, 2020

The Cerritos college women’s basketball team won their conference game against LA Southwest wednesday night by a score of 64-43.

The Falcons now sit at an overall record of nine wins and 14 losses.

It was a close game through the first half as the Falcons took an eight point lead going into the half leading 32-24.

The Falcons kept their foot on the cougars throat as they added 32 more points in the second half to claim their second conference win in a row.

Cerritos offense and defense played exceptionally good throughout the whole game as they were executing in all categories.

Cerritos head coach, Trisha Kozlowski, had some great comments to say about her team after the win.

“I thought our offensive boarding (rebounding) in the first half was tremendous and I think that just eliminated our missed shots and gave us second chance opportunities that were great.”

In second-chance opportunities, the Falcons had 11 points with an overall 28 rebounds in the game.

Coach Kozlowski went on to mention how her team executed game-plan goals in the second half as well.

“In the second half, we won the offensive boards which was awesome and one of our game-plan goals.”

Yerena shared her thoughts on the outstanding performance she and her teammates showed.

“We got o-boards on offense and on defense, we played really good along with moving the ball around.”

Lewis had comments similar to her teammate in regards to the importance of getting the offensive boards but also went into detail about how Coach Kozlowksi made halftime adjustments to shut down Southwest’s main shooter.

“She told us to get on #3(Heather Ortuno) and stop letting her shoot wide open shots.”

That wasn’t the only halftime adjustment made but also needing to stop Southwest’s center #11 Mercedes Ofoegbu, who was their main threat.

“We had to stop her from getting the boards offensively and defensively,” Lewis explained.

The Falcons did just that as they held Ofoegbu to 10 rebounds in the game.