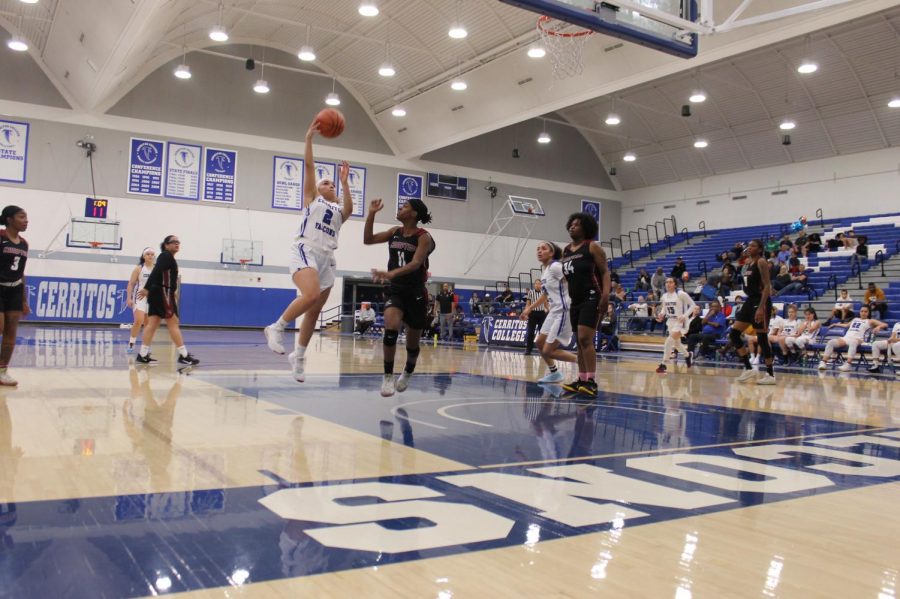 The women’s basketball team won a close game against Compton College on Feb. 19 with sophomore guard No. 2, Mariah Lora scoring a career-high of 24 points for the Falcons securing the win with a score of 61-57.

Cerritos kept the lead in the first half of the game. Lora scored four three-pointers in total and led the team to a 33-24 early advantage at the end of the second quarter.

The game became close, turning into a “battle of free throws,” when the team then lost the lead in the third quarter due to multiple two-point shots and free throws scored by Compton.

Falcons’ sophomore guard No. 13, Sarah Hernandez stated that Compton’s top players to watch out for were No. 11 Andranae Powns, No. 22 Norma Revolorio and No. 30 Niea Ulmer.

Ulmer brought Compton up by eight points, catching the team up to Cerritos’ lead and assisting them in changing the score to 44-43 in their favor.

“I think we should have clamped down a little bit more on the go-to player,” Cerritos College Coach Trisha Kozlowski said in regard to the third quarter. “Just containing them [better] when they went on their two or three or four field goal [attempts].”

Cerritos ended the third quarter with a score of 47-44, making free throws and team composure was essential to winning the game.

“I feel we kept our composure. That was the main thing we had to do to win,” Hernandez said, explaining that key adjustments instilled in the second half of the game was keeping cool. “We kind of lost our cool a little bit.”

“Overall, I thought we kind of figured them out and at least we boarded,” Kozlowski said. “We won the boards and that’s what really kept us in the game and got us to the win.”

Fans of the Falcons watched anxiously as the minutes went by in the fourth quarter.

Lora and Hernandez assisted in bringing Cerritos up again to 51-44, but Compton quickly recovered when its players Revolorio and Powns tightened the gap at 51-50.

At that point, any free throw made by Compton could have cost the Falcons their win.

The teams exchanged points in free throws but Cerritos’ defense secured rebounds and kept the opponents from scoring including No. 21, freshman guard, Precious Yerena’s fight for her own rebounds.

In regard to these free throws, Kozlowski said, “Precious went 1 for 4 but she made one that really mattered because it put us up four points.”

“For a free throw line, we made them when they counted,” she added.

Ultimately, it was Yerena and Lora that secured the win with a score of 61-57 in the final seconds of the close game.

“Any time you get into a tight game, it’s a learning experience for our young kids,” Kozlowski said. “We got a bunch of freshman who will be returning next year and any time that they’re in a tight game, they’re gonna get more and more experience so they’ll feel more composed every game next year.”