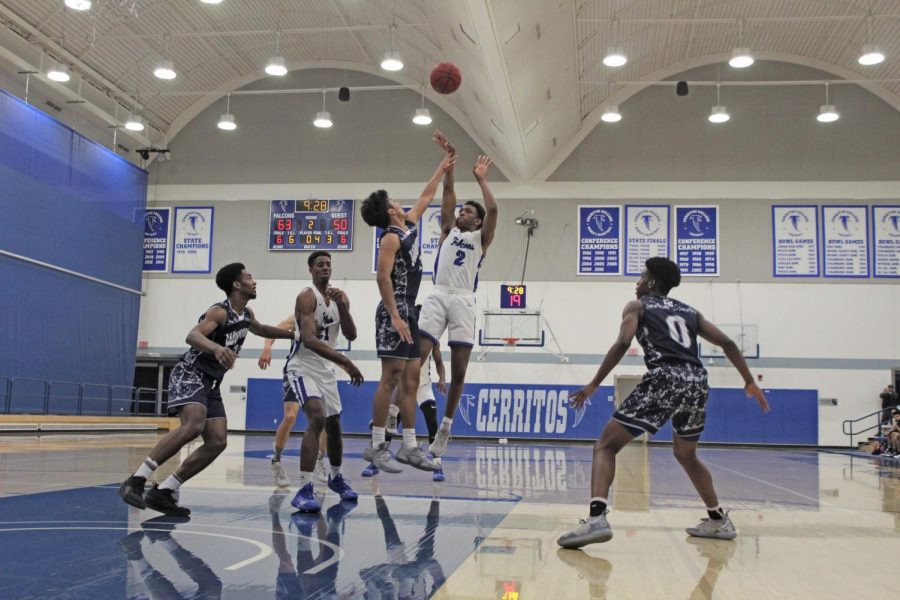 The Cerritos College men’s basketball team earned their 18th win of the season and seventh in conference play after running up the scoreboard against El Camino with a score of 82-67 on Feb.14.

This win for the Falcons puts them another inch closer to winning the south coast conference.

In the first half, both Cerritos and El Camino were making every shot right after the other to keep the game intense and interesting to watch.

Cerritos went into halftime leading the Warriors by three with the score being 36-33.

Whatever Cerritos head coach Russ May said at halftime, it lit a fire for the team where they came out shooting and didn’t look back.

The Falcons scored 46 more points in the second half to punish the Warriors and give them their 20th loss of the season.

After the game, May shared what he said at halftime with his coaching staff and players.

“Defensively, we had to be more aware of where zero [Jamal Howard] was and not let him get easy looks and defend the three-point line better.” stated May

Cerritos defensively held Howard to 21 points in the game.

An impact player for the Falcons in Friday’s game was freshman point guard No. 5, Cerroy Chenault, who had nine points, five rebounds, four steals and three assists.

Chenault mentioned the game plan for El Camino after the game.

“We wanted to emphasize rebounding and talking on defense, making sure everybody is on the same page.” commented, Chenault.

The Falcons had 33 rebounds in the game along with forcing 14 turnovers.

“We started off really slow tonight but the best thing I liked was that we came out the second half with a lot of aggression and fought our way back into the game,” said freshman point guard No. 2, Joshua Belvin.

Belvin was again an impact player on offense as he recorded 16 points, three assists and three rebounds. He came second in team points coming behind fellow teammate No.20, Dorian Harris, who had 25 points in the game.

The rebounding leader in the game for the Falcons was freshman forward No.11, Jaishon Forte.

Forte shared some things May liked from his team’s performance.

“He liked our change of pace and how the team slowed down the tempo along with getting more looks.” stated Forte.

Cerritos looks to add another win to their record as they will play Compton College in a home game Wednesday at 7 p.m.

“We’re going to have to contain that point guard and not let him do what he wants to do,” May stated when asked some things he’ll have his team do differently Wednesday night than the last time the two teams met.

Cerritos had lost to Compton in their previous meeting by a score of 94-67.