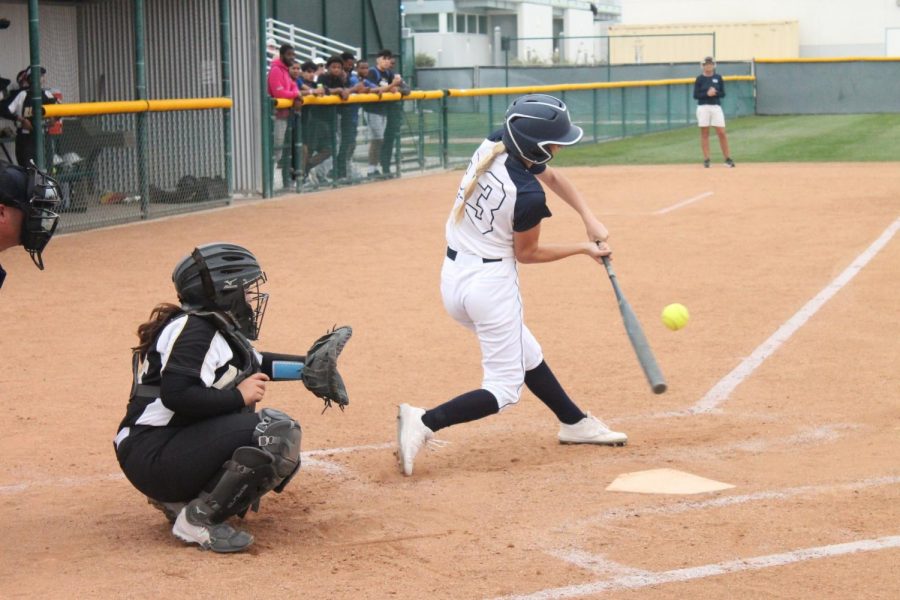 The Falcons bounced back from a two-game losing streak by defeating the Rio Hondo Roadrunners 5-3.

This is the softball team’s second conference victory after defeating the Compton College Spartans on Feb. 13.

Taking the mound in the first inning for the Falcons was sophomore pitcher, Skyler Swearingen. The first Roadrunner batter Swearingen faced was walked, and the second at-bat put the lead-off in scoring position with a base hit to right field.

The Falcons, however, were unphased and kept their composure, with frosh catcher Dominique Jimenez beating the runner at second base for the first out. The Roadrunners were unable to score, leaving one runner stranded on third base.

First to bat against Rio Hondo was sophomore outfielder Itzel Soto. She was walked and then advanced to second from a base hit by CF Haley Davis.

Both runners were advanced to scoring position after a sacrifice hit by Brianna Spoolstra.

From first base, Aros made a break to second but was caught by Roadrunner catcher, Azucena Enriquez. Aros, in pain, was slow to get up before walking off the field, but promptly made her reappearance in the second inning.

Cerritos would continue to score another run in the first due to a RBI single from freshman Aliya Velasquez. The Falcons earned an early 2-0 lead over the Roadrunners.

The excitement continued into the third inning with an RBI single from Brianna Spoolstra, allowing Davis to cross the plate for the second time that afternoon.

Rio Hondo then responded to the 3-0 deficit with some hits of their own starting with a two RBI double by Roadrunner pitcher Grace Acero in the fourth inning. Then in the fifth shortstop Kelly Monroy hit a line-drive over the left field wall for a solo home run.

Swearingen stayed on the mound for the remainder of the game, allowing some hits, but she and the Falcons’ defense prevented any more Roadrunners from reaching home plate.

Cerritos would go on to score two more runs in the fifth and sixth inning with a solo home run by freshman Chasity Martinez and a sacrifice fly ball from Davis, allowing Soto to tag up and score their fifth run.

Skyler Swearingen totaled four strikeouts that game, allowing only three runs in the fourth and fifth inning. She demonstrated her endurance, pitching through the whole game and shutting down the Roadrunner’s momentum.

“I’ve learned along the years to take the mind with an ‘I don’t care’ mentality and I know I can hit my spots and do the job,” says Swearingen, “I also have an amazing catcher (Dom Jimenez) who sets me up perfectly.”

Cerritos was shut out by Rio Hondo 6-0 in January, after winning the second confrontation. Head Coach Kodee Murray said it was not so much about getting back at the Roadrunners.

“I think what today was about was more coming together and figuring out a way to win. We have a good team here, we just have been in a weird funk,” Coach Murray said.

She also commended her team’s pitching and catching performance in this game, along with giving a shout out to the softball field’s groundskeeper, Bill Griffith.