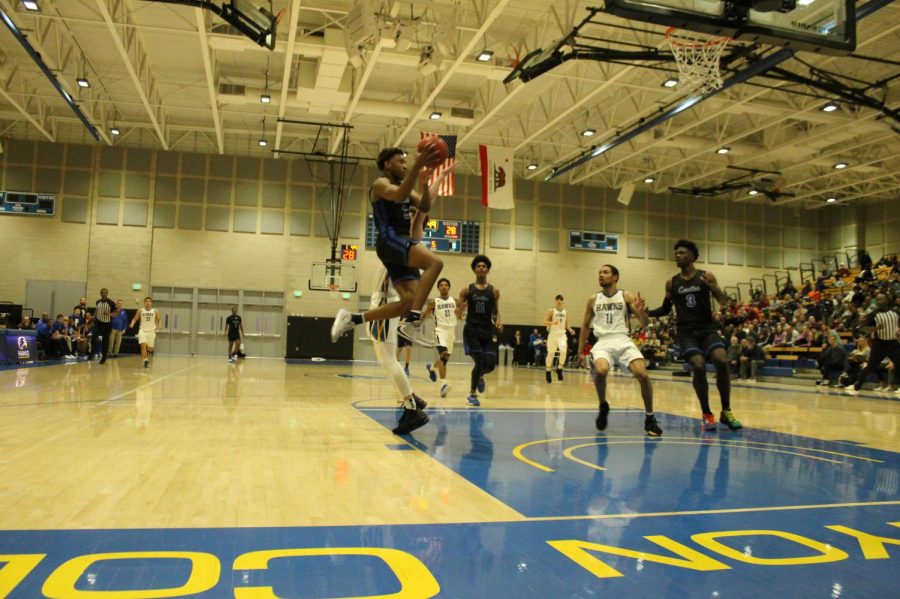 The Cerritos men’s basketball team saw their season come to an end on March 7 after a devastating loss to Santiago Canyon College by a score of 89-67.

The Falcons lost in the third round of the Southern California regional playoff final.

Throughout the game, the Falcons struggled to stop Canyon’s offense as they committed 47% of their shots.

“We could’ve come out with a little bit more energy, we could’ve rebounded better, and could’ve got back on transition on defense,” freshman forward No.11 Jaishon Forte said after the game.

Cerritos fought to keep up with the Hawks offense but was unable to do so as they had problems making easy jumpers and shooting free throws.

Besides the loss, Cerritos head coach Russ May expressed how proud he was of his young team and how far they went.

“With 10 newcomers on the team and for us to get to this point after starting the season 2-5, I’m very happy how far we came,” May said.

May also discussed some factors his team didn’t execute throughout the game.

“We missed some defensive assignments and we missed some good shot attempts and you gotta be able to score the basketball against this team in order to have a good shot.”

The Falcons scored 37% of their shots against Canyon in the game.

Starting point guard for the Hawks, No.11 Antione Jenkins, had his way with the Falcons as he scored a game-high 32 points along with five assists and two steals.

Forte mentioned how Jenkins was the biggest problem to stop on defense for the Falcons along with May’s adjustments for him.

“Coach told us to keep the ball off his right hand and force him to dribble left,” Forte said.

Other than Jenkins being the top threat for the Hawks, No.5 A.J. Garrity was also contributing and adding on to Canyons lead with 19 points, where 12 of them came from beyond the three-point line.

Cerritos ends the season with a 21-11 record, including their playoff win and loss.

All ten freshman players for Cerritos will be returning next season unless pulled up to the next level on a scholarship offer.

Despite their playoff loss, Cerritos achieved goals they set out before and during the season by winning the conference and going to playoffs.

This will bump up their ranking in the state and attract future recruits.