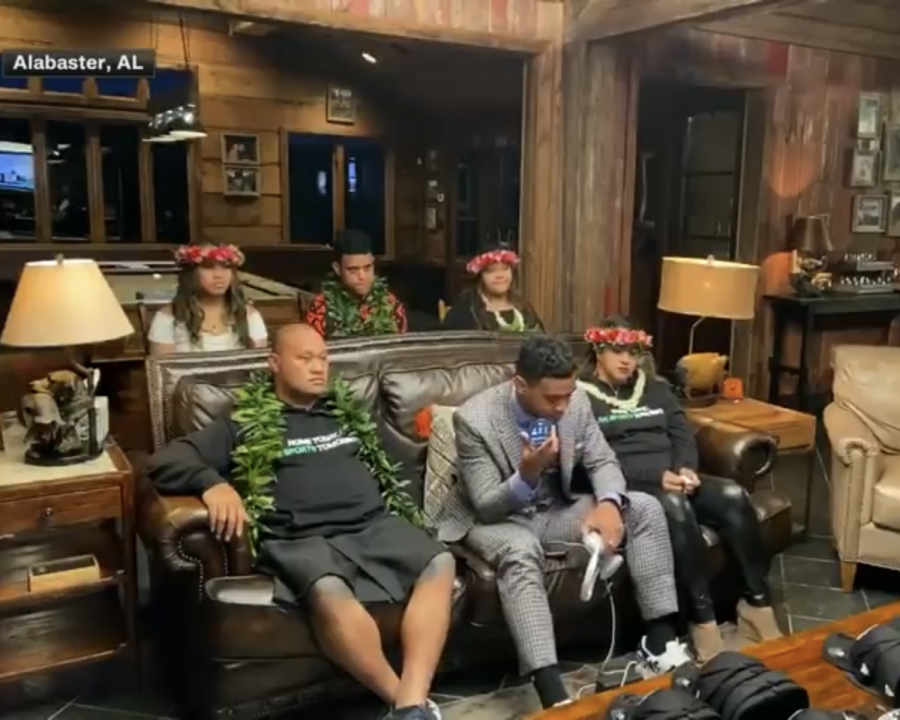 Tua Tagoviloa getting the call of his dreams from head coach Brian Flores of the Miami Dolphins telling him he is moving to south beach. The NFL draft starts off April 23,2020 and is held virtually because of COVID-19.

This year’s NFL Draft is the most unique of them all. For the first, and hopefully the last, time ever the draft was virtually online where commissioner Roger Goodell announced the young athletes’ name from the comfort of his home.

A night where we saw tears, families and robes only means one thing: the NFL draft is upon us.

We saw the homes of the soon-to-be NFL stars and homes of head coaches and general managers during the draft.

The draft started off with Jennifer Hudson singing “Lean on Me” inside of her recording studio.

The song was dedicated to people around the world to encourage them to lean on each other through this pandemic.

Hudson was not the only performer of the night. A New Orleans Saints fan Harry Connick Jr. sang the United States national anthem.

The first pick of the night left no one surprised as the Cincinnati Bengals selected Joe Burrow from LSU.

The young quarterback returns to his home state of Ohio where he was raised in Athens.

One player whose selection was a little bit higher than expected was the quarterback from the University of Alabama, Tua Tagovailoa.

Some predicted he would be the sixth pick which would send him to the Chargers but the Miami Dolphins beat them to the punch, taking him as the fifth pick in the draft.

The Los Angeles Chargers had a backup plan and they picked Justin Herbert, the Rose Bowl winning quarterback from the University of Oregon.

The Chargers have a lot of faith in Herbert, as he threw 3,471 yards and scored 32 touchdowns last season for the Oregon Ducks.

A very big pick in the draft came at the eleventh pick for the New York Jets when they selected Louisville offensive linemen Mekhi Becton who is 6’7″ tall and weighs 364 pounds.

This pick was smart for New York because Becton can help the Jets protect the quarterback Sam Darnold in during their plays.

One of Becton’s greatest skills is that he ran the 40-yard dash with a finishing time of 5.1 seconds making him the fastest three hundred pounder to run it.

This selection raised a lot of eyebrows because the Packers already have an elite quarterback who won them a championship and won an MVP award, NFL player Aaron Rodgers who is now 36 years old.

To all Packers fans and Rodgers himself, this may seem like deja vu to them because in 2005 the Packer had a championship-winning MVP named Brett Favre who was 36, and Rodgers was the same age as Love is right now when the Packers drafted him.

A few years later Farve got injured and he never played for the Packers again and Rodgers took over the starter position ever since.

Henry Ruggs III a young wide receiver from the University of Alabama is the first person ever to be drafted by the new Las Vegas Raiders.

The Alabama receiver ran an outstanding 4.27 in the 40-yard dash at the NFL combine.

Ruggs was relaxing at his home with his family wearing an all-white robe with a red old spice logo on his chest as his name was called by the commissioner.

The Raiders head coach Jon Gruden and general manager Mike Mayock are looking for speed and hoping it leads to a future championship for the Las Vegas Raiders.

One team that disappointed their fans was the New Orleans Saints when they selected a center from the University of Michigan of all places, the player being Cesar Ruiz.

Saints fans had mixed reactions with the selection because the Saints drafted a center last year. Some were disappointed, excited and confused with the pick.

However, coach Sean Payton announced that he plans to use Ruiz as a lineman instead of a center to add youthful strength to protect Drew Brees from other defenses.

The Saints were the only team to select a center in the first round of the draft.