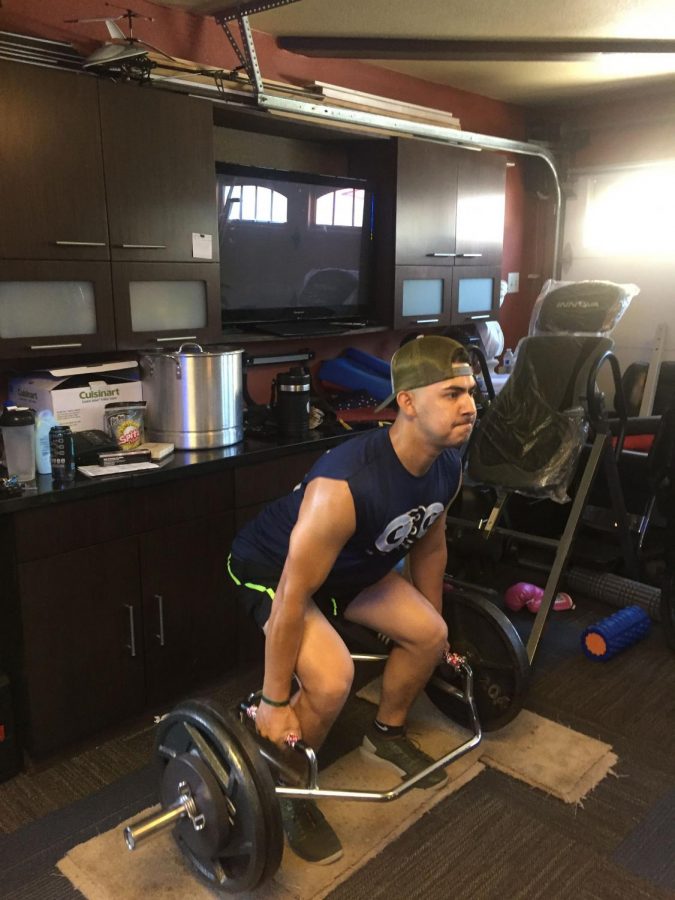 While the Cerritos Baseball team is left without a field to practice on, they have developed other means of staying on top of their game.

The COVID-19 pandemic changed college sports and many players and coaches were unaware of the severity of the changes until they experienced it firsthand.

Cerritos College baseball head coach Vic Butler said, “We started feeling the effects of COVID-19 maybe a week or so before? I think at that time the team they really didn’t know the importance of it, I made an announcement on the bus about how they came out with a policy when we played our opponents, we couldn’t touch, we couldn’t shake hands.”

The players have had no access to the on-campus gym and, as such, have had to find other means of staying conditioned.

David Hays, first baseman and relief pitcher, said a goal for him has been to lose weight.

Right now, he is focusing on “cardio-based core workouts” like running a mile every day.

“I want to start increasing the value by the next few weeks. I’ve been dieting, not really too much baseball work, but working on my physical body,” Hays said.

Frosh pitcher, Noah Ortega, No.50 said, “It looked like we had a real good shot at us doing something special this year. Throughout the season you’ll hear a bit about the coronavirus but we never expected it to stop things from happening.”

Ortega continued, “It was pretty hard especially with how good we produced on the field. I just feel like this stopped all [of] our momentum.”

Some players have home gyms and have had better means of staying in good physical condition despite being quarantined.

Andy Hurtado, No. 10 Frosh relief pitcher, said, “I have my little gym right here in my house, but I mean, I do the workouts that the trainer from the school gives us and I was blessed to have my buddy who goes to UC Santa Barbara was also a pitcher.”

Hurtado said he and his friend have been conditioning together “doing mixtures of long-distance running and interval sprints,” just to stay in condition for the next season.

Ortega said that as a pitcher, he doesn’t feel the need to pump iron.

Instead, he chooses to go out for runs.

He goes to Apollo Park in Downey to practice his long toss with a teammate or friend.

He also does bodyweight exercises to get the blood going.

Ortega said a goal of his for the 2021 season is to return faster and stronger and he expects the same from his teammates.

“As far as my teammates. we all feel like our 2020 was taken from us so as far as 2021 goes, I feel for the 2021 season we’ll all be ready for it,” Ortega said. “Living through this season we’ll come in knowing at any moment this can all be taken away at any moment.”

The California Community College Athletic Association has announced that because of the COVID-19 Pandemic, players will get extended eligibility to play under the CCCAA.

Butler said, “there are a few players that are targeted to some colleges. Nothing is written in stone as far as those players leaving or coming back. It is still kind of 50/50 [for the] most part that the majority of the players are going to return.”

The Falcons have set their goals for future seasons, hoping to score a place in higher division sports.

“For me, my expectations will be a perfect world of coming back next year. We’re returning players in a state championship,” Butler said. “My biggest thing and what will really make me proud is to get all the sophomores to a D [division], one at worse a D two [school] and get some guys drafted.”

“I believe that I can do that that I really do on my job as a coach. Not only on the baseball field but in the classroom as well,” he added.

The Falcons are unsure when they will be able to play again or have access to their field.