After 11 years of leading the Falcons, Coach Russell May is nowhere near done 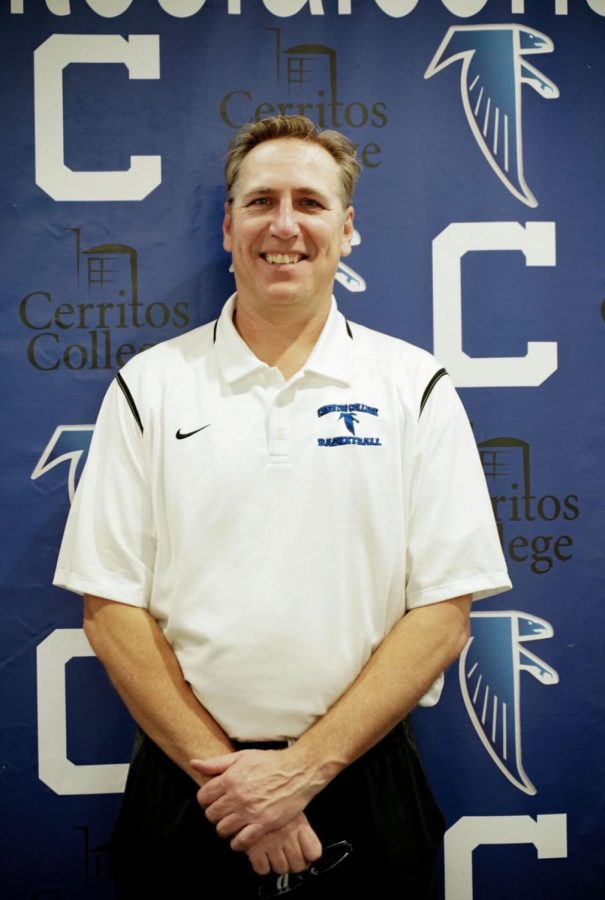 As far back as the sixth grade, Russell May recalls being the student-coach for his basketball team.

Fast forward 11 years later, the coach of the Cerritos men’s basketball team May received an award for being one of the most influential coaches in “JUCO” [junior college] Basketball.

“I felt humbled. It’s an honor to be recognized for all your hard work. I couldn’t do it without my mentors, my assistant coaches, or the players,” May said.

May credits his success to his players’ belief in him. He believes in them and, in return, his players trust him to put them in the best position to be successful as a team.

He doesn’t let the little things bug him, stating “it’s not always about the X’s and O’s, it’s about the students.”

His coaching success is due to the fact that he always put the players first.

In high school, he loved sports. He played soccer, baseball, basketball and football. It was then when he realized that he loved his coaches and watched their lifestyles.

Being the younger brother of three boys, he always had the drive to be good enough to play with his older brothers. There was always the determination to stand out.

Upon reaching the college level, he played for two seasons as a Falcon.

In his freshman year, the men’s basketball team won the conference before losing in the second round of playoffs.

Sophomore year, the Falcons finished second in the conference and though he was injured for most of the second half of the season, he was awarded an honorable mention by the Southern California Conference (SCCA).

He would then transfer to Cal Poly Pomona excelling in basketball and volleyball.

He taught at Los Alamitos High School while coaching the basketball team part-time, and was also coaching at Cerritos College part-time as well.

He served as a part-time assistant coach at Cerritos under Coach Jack Bogdanovich and under Coach Dean Ackland for six seasons before being handed the head coach position.

His first year as head coach, he was a walk-on.

He worked as a teacher at Los Alamitos High School and would drive over to Cerritos to run the men’s basketball program.

The following year he was the full-time head coach of the program.

“It is a huge difference. It allows you to be on campus more and help your players more,” May said.

This was the beginning of May’s strategy of always putting players first, to work hard to put the best team on the floor and help them get into four-year schools to continue their schooling and basketball career.

May has had the opportunity to coach some very successful players during his years of coaching.

Some of his former players played overseas like Anthony Holliday, a former Falcon basketball player who played for Lusitania in Portugal in the Liga Profissional.

Ken Brown, another former Falcon player, went to the Latvian Basketball League in the 2012-2013 season and is now a point guard in the Greek Basket League.

Coach Russ May has been associated with the Cerritos College basketball program for the past 17 years but he still gives all the credit to his players for “making him look good” in accomplishing so much in the basketball world.