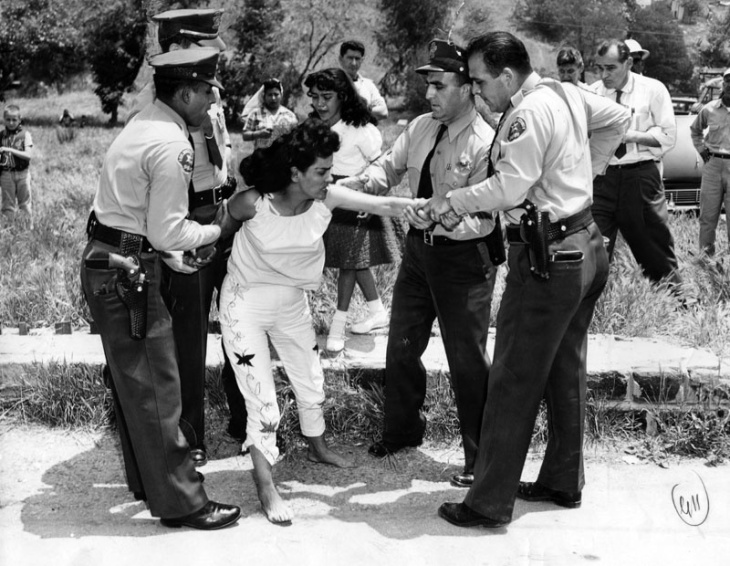 Police removing resident Aurora Vargas from her home before the bulldozers show up to knock down the remaining homes. Photo was taken in Chavez Ravine. Photo credit: Courtesy of Elina Shatkin

Dodger Stadium is widely known as one of the most beautiful stadiums in all of major league baseball as it sits in Chavez Ravine.

It is the biggest stadium in baseball holding up to 56,000 seats, the third oldest ball-park, and has made many historical moments for the Los Angeles community.

But some people might have forgotten how the stadium was built, with the clearing of Chavez Ravine residents.

Chavez Ravine was founded by Julian Chavez, a rancher who would later serve as an assistant mayor, and the first LA County supervisor.

Chavez would buy land in Stone Quarry hills, which would later be named after him after his passing in 1879.

That land would end up being homes to Mexican-Americans for years until they were eventually kicked out.

In the 1950’s, the city was trying to convince the residents of Chavez Ravine to sell their homes for a new housing project that was going to be built on there land.

Many families refused to give their homes to the cites.

Officials would later use their power to force them out of their house, the resident were lied to and given a small amount of money even though their land was worth a lot more.

Most of the community left from the neighborhood.

In 1957, there were a few families that had been still living in Chavez Ravine at the time.

In June of 1958, voters approved to trade 352 acres to the Dodgers owner Walter O’ Malley to build a stadium.

Walter O’ Malley saw potential to make money in Los Angeles, and had took a helicopter ride to see where his team can build.

O’Malley saw the 352 acres he needed to build his stadium in Chavez Ravine.

When it was time, the city used eminent domain on the residents, and dragged out families from their homes to evict them.

Many of them had been removed by force while some were injured by the police as they had fought back with guns and sticks.

Residents had even stayed in their own homes until bulldozers came to destroy all the remaining houses that were still standing.

In the end, the whole community was lost, and construction for the stadium had started as soon as the last house was gone.

Many families left with no money, clothes, and food. The city had forgotten about the community that was living there.

When the stadium was finished, a lot of Latinos did not go to the games, as they boycotted the Dodgers organization for what they did.

For many years it was only whites that went to the game, and ownership felt like they needed to change that for the latino community of Los Angeles.

In 1981, the Dodgers signed mexican pitcher Fernando Valenzuela, who would later become a legend in Los Angels latino community, and help reunite latino fans and the Dodgers organization together.