"Quarantine Blues" is a column dedicated to sports stories and updates from various Falcon Athletes. Stories are published weekly on TalonMarks. 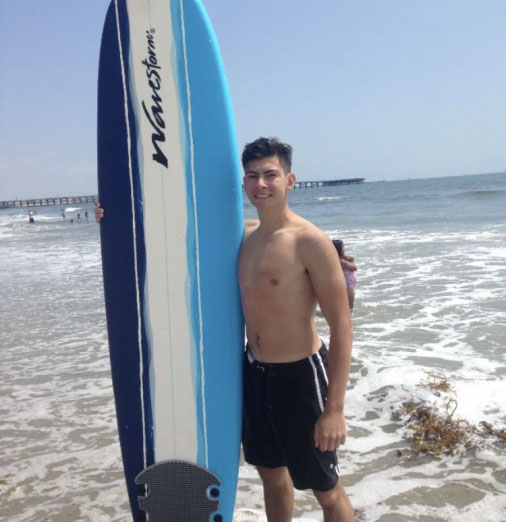 Cerritos College’s sophomore swimmer, Nicholas Herrera, tries his best to be in shape when he gets the call to go back in the water for the upcoming swimming season.

Herrera workouts have changed since COVID-19 has prevented him and his team from going in the water.

He has turned to biking, and home-workouts to be in shape until they are allowed to go back.

Herrera’s preparations for events before the pandemic would be by working out in the weight room throughout the weeks, then practice in an event he knew that he was gonna participate in.

Herrera is an all around remarkable athlete for Cerritos. He has finished first in the 200 breaststroke, 300-meter race, and placed third in the 100-meter at the St. Paul classic swim meet.

Herrera is an alumni of Norwalk High School where he performed on the track team due to the fact that the school did not have a pool.

At Norwalk, Herrera performed in the pole vault, 100-meter sprint, and 300-meter hurdles.

Ever since joining the Cerritos College swim team, he has already won events in his first year in the water competing.

Herrera had a job as a lifeguard since his junior year of high school, and gave back to his community by being a swimming instructor at the Santa Fe Springs pool.

Herrera likes to be competitive, and believes that he could accomplish anything he puts his mind too.

According to Nicholas his favorite athlete is 28x olympic medal winner Michael Phelps.

Michael Phelps is a USA olympic swimmer who is known to be the “Greatest Olympian of all-Time.”

“He’s one of the most recognized swimmers in the world. He didn’t stop after people thought he was gonna retire. I want to be successful like him.”

Herrera has been swimming his entire life, and has been competing in events since he was eight years old when he started with the Santa Fe Springs competitive team.

When in the water, Herrera never feels pressure.

“I feel at peace because it’s just you and the water and nothing else.”

Herrara’s biggest motivation to become his very best is his parents since they both have always supported him no matter what, and strive for him to succeed.

“They keep me going, and I want to make them proud.”

After attending Cerritos College, Herrera wants to go to either Cal State Los Angeles or Rio Hondo as an undergraduate to complete his fire science degree.

Herrera has been wanting to become a fireman since he was in high school where he took a biomedical class throughout his 4 years and felt inspired.

Herrera wants to be on the olympic swim team, but as a fall back wants to be able to finish school, and pursue a career as a fireman.