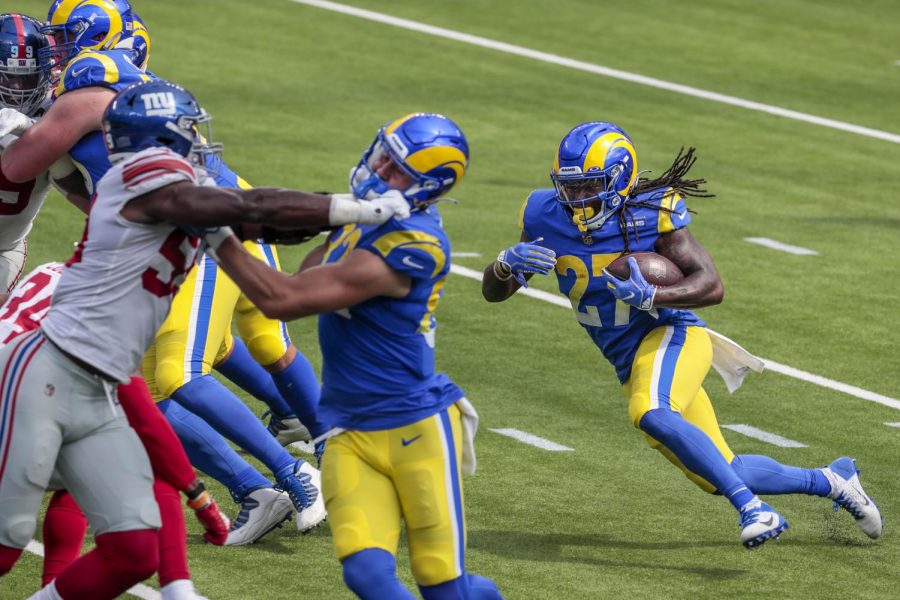 Los Angeles Rams running back Darrell Henderson (27) on a first half run against the New York Giants on Sunday, October 4, 2020 at SoFi Stadium in Inglewood, California.

It’s COVID’s fault for so many NFL players getting hurt in the first three weeks of the season.

Team trainers and strength and conditioning coaches should also be to blame as well for the many season-ending injuries players have to deal with.

Since the regular season started, over 200 hundred players have been injured according to pro football reference.

Superstar players you thought you would have never seen their season end so early, ended on one awkward play.

Players like New York Giants running back Saqaon Barkely, or Carolina Panthers running back Christian McCaffery have had their seasons cut short due to ACL tears and ankle injuries.

Why are so many players getting injured so early in the season?

Coaches and football media blame it on the absence of pre-season games which are scheduled normally in August.

Due to COVID cases running rampant and the slow management process from the league, the NFL had no other choice but to cancel the pre-season.

NFL coaches and training staff should’ve seen this coming and prepared their players.

Right after it was announced that there will be no pre-season, they should’ve alerted their training staff and strength and conditioning coaches to focus their players’ workouts on mobility exercises and lift lighter weights with an increased amount of reps.

It’s the team’s strength and conditioning coach and training staff’s job to make sure their players take care of their body and recuperate after each practice and game so their chances of getting injured are slim.

The NFLPA (National Football League Players Association) even states that they continue to make advances, on and off the field, in an effort to protect its players by championing new developments in engineering, biomechanics, advanced sensors, and material science that mitigate forces and better prevent against injuries in the game of football.

NFL teams have done a good job so far handling COVID and testing players for the virus.

That is until last week when eight players on the Tennessee Titans tested positive for COVID-19 but that’s a whole nother story to talk about.

To the strength and conditioning coaches and training staff of the league, switch up your weekly plan and focus on exercises and treatment that will prevent player injuries and possibly save your jobs.