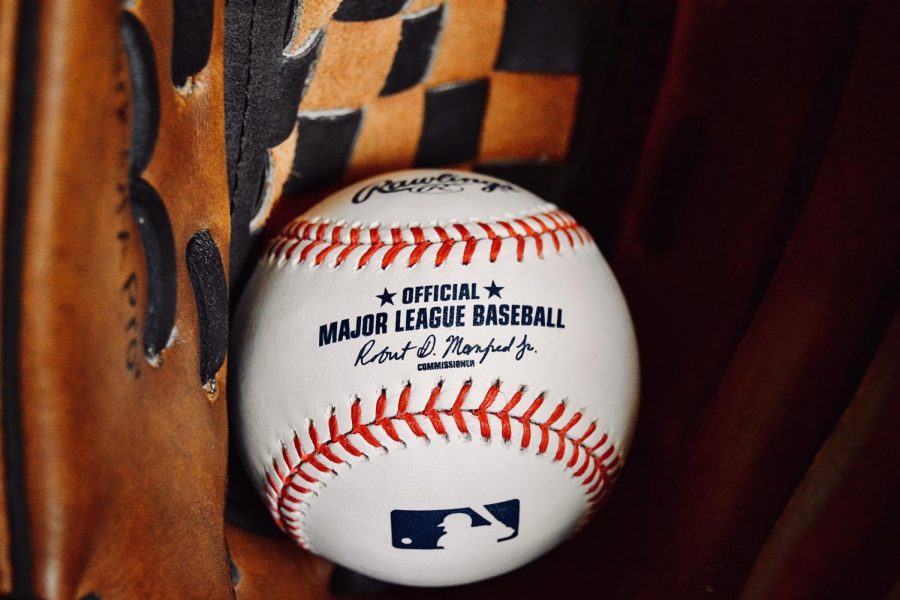 the 2020 World Series is underway and many fans are showing their full support to their main teams Photo credit: Nate Nickel on Flickr.com

ISAIAH: Hello everyone, my name is Isaiah Lonvelin, uhh- for this podcast, I will be discussing highlights from last week’s postseason games. My prediction for the ALDS and NLDA series and my opinion on letting fans get tickets to watch the postseason games in Texas.

ISAIAH: So first off last week, 16 teams played into wildcard matches to see who will move on to the National Division Series and American League Division Series. Those teams that moved off for the American League were the Houston Astros, Tampa Bay Rays, Oakland Athletics, and the New York Yankees. That shows face stopping at the Minnesota Twins in the best of three series. That’s with the twins into games.

ISAIAH: The first pitching matchup was can Kenta Maeda against Zack Greinke, and the third inning of the game on the twins broke the scoreless game one designated hitter Nelson Cruz drove the first were first run for two twins. But in the ninth inning, due to error from the twins of defense and clutch hitting from Michael Brantley to drive in three runs. The Astros were able to make a comeback and take the first game of the series.

ISAIAH: In the second game called Tucker furred, Astros was able to drive in two RBI singles to lead dash So three to one victory to send them to the Division Series. In the second game the Tampa Bay Rays were able to sweep the Toronto Blue Jays in 2 games were hitting and pitching dominating for the race. Blake Snow and Emanuel Margo would help to raise when the first game thought was Shrike. I’m nine batters and Margo had to hit a two-run home run to finish game one with a score of three to one. Game two was no competition as a final score. 7-0 on Terminfo with his screaming lineup for a Grand Slam against Hyun-jin Ryu to shut the door on the Blue Jays playoff run.

ISAIAH: Lucas would get help from Adam Engle, Jose Abreu, and Yasmani Grandal who each collected a home run for the final score 4-1. The Athletics were able to win the second game with a score of 5-3, The Athletics for a 5-0, then the White Sox started making a comeback in the eighth and ninth inning, but fell short. And the final winner take all, The Athletics were able to close it out with a score of6-4, thanks to Mike Firestar and clutch hitting, which made The Athletics win a postseason series since 2006. A historical moment was Tim Anderson shortstop for the White Sox was the first player to get nine hits and their first three postseason games. The last game for the American League wildcard series was the Yankee sweeping the Indians in two games, ace Gerrit Cole and the Yankees offense. Yankees offense hitting was able to take game one with a score of 12-3. Gerrit Cole shut down the Indians hitting for seven innings while the Bronx Bombers will hit four home runs off of Indians ace Shane Bieber, which was his first postseason start.

ISAIAH: Yankees will have to crawl back for their second one after the Indians offense was scored three runs, and the first sending offers starting pitcher Tanaka. But with bases loaded and the top of the fourth inning, Yankees hitter Urshela would hit a Grand Slam to take the lead back and forth until the ninth inning when first baseman DJ LeMahieu provided to a go-ahead RBI single in the night.

ISAIAH: Now my predictions for the ALDS I feel that that lead will be able to sweep in the best of five against the Astros. Athletics have a more competitive team and has started and has better pitching than the Astros. Now Nashville’s pitching rotation has many first-year starters and has solid batters. But in my opinion, it will not get them very far. They’ll be playing in Dodger Stadium for their Division Series games.

ISAIAH: The next matchup that should be very entertaining to watch is the Yankees and Rays. I have to go up to underdogs and pick their razor come up with a win. The Rays have been clutch and their bullpen can hold opponents down no matter what the score is. But it will be hard with this dangling team which is known as the Bronx Bombers.

ISAIAH: Yankees’ pitching has been on the rocks but has been helped by their offense. The Rays and come out on top at the bats are awake at pitching stays the same as it has been for their freedom to pass 60 games. They’ll be playing at the Padres Stadium in San Diego.

ISAIAH: Now for the National League games, it will it come with a mix of emotions for a lot of teams I feel like and I feel like the National League wild-card games have been the most entertaining to watch than the American League. The teams that will be moving on are the Atlanta Braves, the Los Angeles Dodgers, the Miami Marlins, and the San Diego Padres. First, off the Atlanta Braves sweat the Cincinnati Reds in the wild-card game due to dow hitting the reds. It was a pitching matchup for both teams but the Braves were able to drive in runs while the Reds were unable to bring anyone home into games. Trevor Bauer for the Reds shut down the Braves offense for eight innings but in the bottom to twelfth inning, Freddie Freeman drove in the game-winning single to finish the first game 1-0. The second game raises off as scattered gather hits to win 5-0 ending the Reds playoff run. Next up is the most underrated team, the Miami Marlins. Their minds have not been in the postseason since 2006 but have not lost the series in the postseason since being the Cubs of record now seven No. And um the Marlins probably destroyed everyone’s brackets for the 2012 postseason, including mine by putting a good matchup against the Cubs. The Cubs hitting was destroyed by Marlins pitching and the Marlins were able to rack up hit after hit to secure their spot in the Division Series.

ISAIAH: Then the next series was the Dodgers sweeping the Marquis Brewers. Dodgers’ offense has been the best in the MLB and pitching as well. And I’m not trying to be biassed since I am a Dodger fan myself, but what their numbers they are the most feared team in the postseason. The Dodgers starting pitching showed Brewers chances of scoring and the bullpen for the Brewers have not been so good on the road, allowing seven runs in two games.

ISAIAH: Dodgers were able to sweep the Brewers and are now going to meet the Padres in Arlington, Texas. A big thing to recognize is Clayton Kershaw holding a Dodger record for most strikeouts in a postseason game. We all know that he had his fair trouble during a playoff run, but if he pitched like he did last week, they will win the World Series.

ISAIAH: Next up is San Diego, they beat the Cardinals in a tough and exciting wildcard game. This was a good matchup, and Padres came in clutch making a comeback in the second game. After losing the day before Tatis Jr., Manny Machado and Will Myers hit a pair of home runs to make the comeback possible in the second game, coming back from 6-0 Padres were able to keep their momentum and win the series to 2-1 to face the Dodgers and the NLDS.

ISAIAH: Now for the NLDS matchups will be the Marlins vs. Braves and Dodgers vs Padres. I think that I’ll have to go for the Marlins to come out with a win against the Braves. I know the Braves are a powerhouse team but how can you not go for the Marlins? I mean, they are undefeated so far in the postseason. But Braves do have pitching defense and hitting but it is baseball and anything and anything can happen.

ISAIAH: I feel like – teams that make the least mistakes can win. Now probably the matchup West Coast fans have been wanting the Dodgers and Padres, the David versus Goliath matchup. Now, I’m not trying to be biassed but if the Dodgers play like they had before against them, and during the regular season the Padres have no chance. Dodgers have everything working for them and have a competitive pitching rotation. But Padres are playing with a chip on their shoulders. They want to prove everyone wrong and come out on top and have the chance and have and they have the chance to do that. If to do on Manny Machado Fernando Tatis Jr. hit along with their dangerous lineup. They will come out on top but the biggest weakness for them is probably pitching. Their bullpen has trouble coming in to hold the lead whenever they are up, but it should be a memorable matchup in Texas.

ISAIAH: Now on the MLB network, it was announced that they will allow fans into a globe-like field in Arlington, Texas for the NLCS and World Series games. The stadium will be open up to 50% capacity. The Globe light field seats up to 440,300 and has a ream retractable roof MLB says it has received appropriate approvals to host friends who will be seated in the socially-distance four-person pods. Now I think that this is a good idea. I mean that they start opening up movie theaters and malls and they can allow fans who are watching him for two to three hours. I mean even if football some stadiums are allowing fans to watch the games right now, and it will be for the postseason, which will be nice to get some real fans cheering instead of the pre-recorded fans.

ISAIAH: As long as the proposal said that they will be social distancing, and people will wear masks then everyone will be fine to enjoy the game. I personally would not minds getting a flight to Arlington to watch and postseason baseball, but I know that all the tickets will be sold out in seconds. It is a good idea, I feel like it is a good idea.

ISAIAH: I feel like and many baseball fans agree nothing beats going to a major league baseball game. Entering the stadium, fans excited for the game, the smell, looking at the diamond from your seat. I’m just tearing up thinking about it. But it will be nice to watch on TV and seen the crowd around the stadium.

ISAIAH: Alright, everybody, uhh- thank you for listening, and hopefully, I’ll be back doing a podcast again. Have a nice day people, signing off.