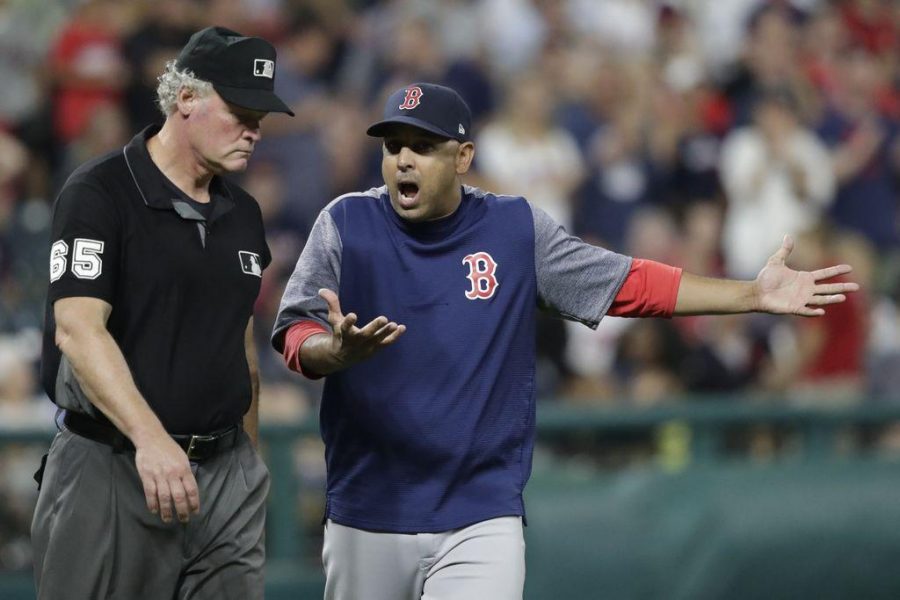 From a close call at third base in the eighth inning to some pitching decisions that were sure to draw a raised eyebrow, Red Sox manager Alex Cora (shown arguing with umpire Ted Barrett) was all in Tuesday night. Photo credit: The Providence Journal

Former Red Sox manager, Alex Cora, has been called back to manage after his one-year suspension for his part in the Astros cheating scandal.

Frankly the baseball commissioner, Rob Manfred, gave out his punishments too lightly to a person who ruined other players lives, like giving a student an A on his test even though the teacher saw he copied another students work.

Before Alex Cora had won the Red Sox a World Series as a manager in 2018, he was the bench coach for the Houston Astros during their dramatic World Series run in 2017.

Two years later he was found as the mastermind behind the sign-stealing scandal where the Astros would bang on a trash can indicating what pitch was coming.

The league gave one-year suspensions to then manager A.J. Hinch and Alex Cora along with a $5 million fine to the Astros team.

It is frustrating to see as a baseball fan how Manfred gave out his punishment like it is not a big deal, basically making it seem like it is okay to cheat in a professional game.

Manfred just gave Cora a vacation and now he is back managing for a professional baseball team.

People have to realize how Cora and the Astros ruined player lives with what they were doing for three years.

Imagine your a pitcher making your debut against the Astros, you are getting hit off so easily it is not fair. After your start you are sent back down to minor leagues to figure out what you did wrong potentially losing on a million dollars.

With what Cora did, he should be banned from baseball entirely, without any question but unfortunately that will not happen.

Alex Cora should feel ashamed of what he did, and deserves no respect from the fans of baseball.

It is sad to see that the MLB has given a harsher punishment to Pete Rose who just gambled for his team to win, not once betting against them to lose. Manfred is the biggest hypocrite to call himself a commissioner.

Seems like gambling is a bigger problem than sign stealing to win a championship, giving no remorse to those who were cheated out of a job or chance to win a World Series.

It should not have come down to a decision if MLB were to bring back Cora, it should be final that he has never set foot in another major league stadium again.

The fans of baseball have taken to social media once again to express the feeling of allowing a cheater back in the game with reasons on how Manfred has once again messed up.

MLB has begun to turn into a clown league by not rightfully banning a coach for what he did, but rather give him his job back because it is okay to use technology to steal catcher signs.

MLB is setting a bad example, this is probably why the league is the biggest joke then the other professional leagues because they welcome back with open arm cheaters.