Off The Field: Tradition of Thanksgiving football in America 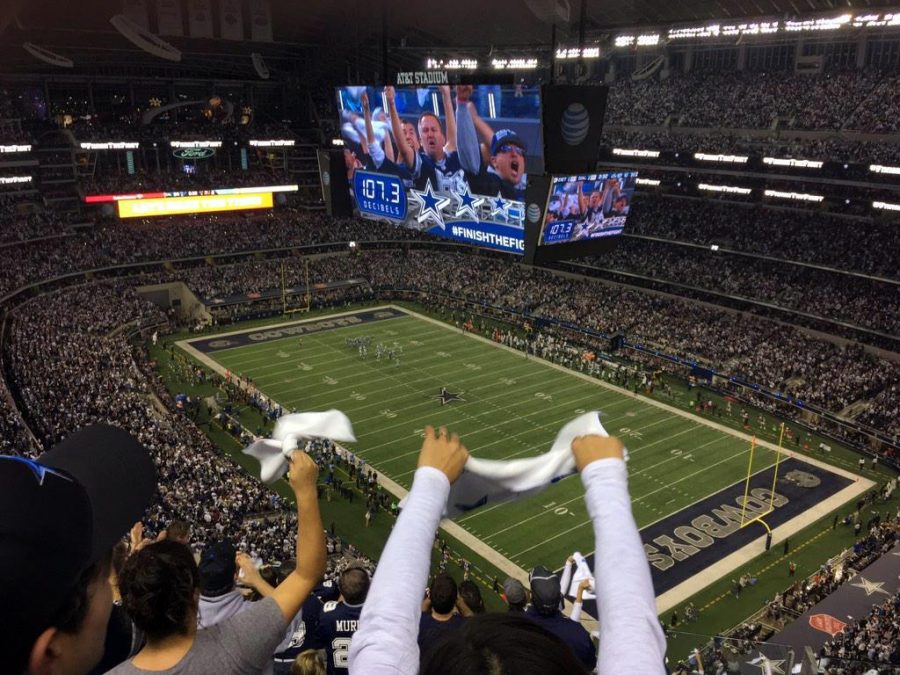 Cowboys fans cheer on their team as the Dallas Cowboys battled against the Detroit Lions in the first round of playoffs. The Cowboys and Lions are the only two teams that play every year on Thanksgiving day. Photo credit: Victor Araiza

Thanksgiving is quickly approaching for families getting prepared to spend the day together to share an expression of gratitude with each of their loved ones.

For football fans it is the holiday of Thanksgiving football, a great tradition where two NFL teams, Detroit Lions and Dallas Cowboys, would battle on the gridiron on America’s day of thanks every year since 1934 and 1966.

The American football games began playing on Thanksgiving day with college teams back in 1876.

The first two teams were Yale and Princeton who began the long tradition of playing each other on the day of thanks, with many other college teams joining them after.

When the NFL started up in 1920 they had followed college teams with the league playing on Thanksgiving but were not as popular as they hoped it would be.

One team would change that as the Detroit Lions had an edge on other teams because of then owner and former radio station owner Geroge Richards’ marketing skills.

When Geroge Richard bought the then Portsmouth Spartans, he moved the team to Detroit renaming them the Lions.

He knew that the city of Detroit’s fan base was mainly with the Major League Baseball club Detroit Tigers so he needed a big show to bring fans to support his new football team.

He made a deal with NBC to broadcast the Thanksgiving games on 94 stations across the United States ultimately being a hit bringing fans to the stadium.

In 1966, America’s team the Dallas Cowboys, would join the Lions in the tradition of playing on Thanksgiving day.

The NFL was looking for more teams to play on Thanksgiving as it was only the Lions playing one other team since 1934.

No other team was signing up until the general manager of the Cowboys’ Tex Schramm signed up his team to play on Thanksgiving.

Schramm saw an opportunity to put his team in the spotlight to bring more fans to Dallas to watch his Cowboys play.

There was no guarantee to them that it would help them fill up their stadium like the Lions have been doing for a plethora of years.

The NFL was even concerned about Texans being persuaded to go to a football game during a holiday that they promised Schramn a gate revenue if no fans would show up.

How wrong the NFL was that on turkey day the Cotton Bowl was sold out trying to squeeze in 80,259 people into the stadium to watch the Cowboys vs. Brown on their first turkey game.

From that day forward the Cowboys and Lions have not missed a Thanksgiving game becoming the only two teams to play on Thanksgiving day since their teams decided to play.

These two teams no matter their record during their season are the most popular teams to play on Thanksgiving day making families sit together to watch football enjoying a day families will cherish the most.

Happy Thanksgiving everyone, be safe out there with your families and enjoy the game.