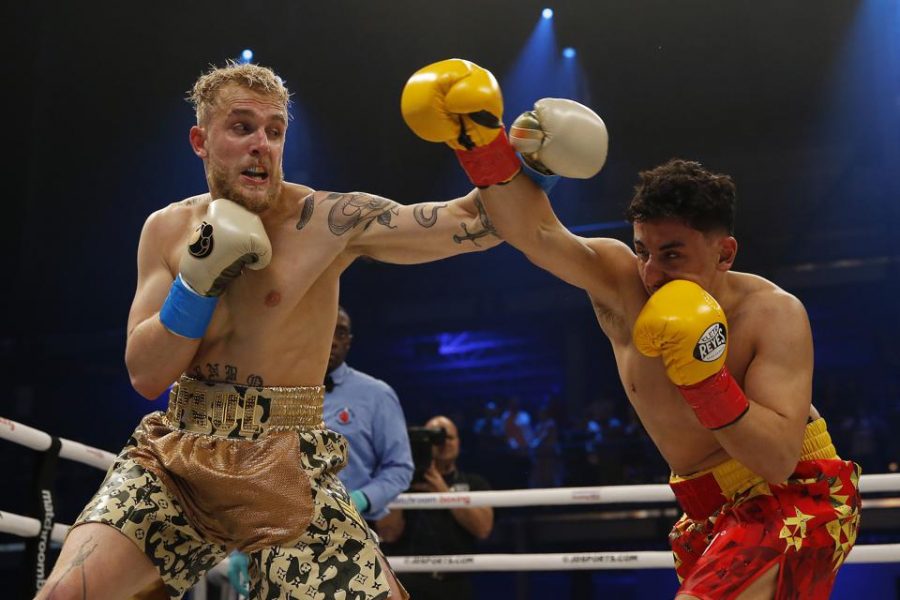 Jake Paul and AnEsonGib exchange blows during a boxing match in January. YouTubers are finding new ways like boxing to gain clout and boost their popularity in the entertainment world. Photo credit: Michael Reaves/ Getty Images

YouTubers today will do anything to get more subscribers and viewers for their channels, but instead of click baiting it is heading into the world of boxing.

Surprisingly, it is working. With gaining media attention and other professional boxers like Mike Tyson wanting to see more YouTubers fight each other in the ring for entertainment, we may have more YouTube boxers on the way.

It is certainly different but can be turned into a regular event which can work its way into a pay-per-view fight that brings in more viewers.

The only time it should not go any further is when a creator wants to fight an actual pugilist who fights for a living.

This is where the line should be cut off. It is not a bad idea for two YouTubers of equal skill to fight each other, as both are equally matched. They will surely gain enough attention out of the two fan bases, along with avid boxing fans.

To actually go in the ring with a professional boxer is absurd. As we all know, it is going to end in a short amount of time anyways. The consequences could be severe for the loser.

If you watched Saturday’s pay-per-view fight, you will remember the match between Jake Paul vs. Nate Robinson. It was sloppy, with them hugging each other half the time, but was nonetheless entertaining.

The fight was comedy watching them fight along with the commentary between Sugar Ray Leonard and his partners.

Sugar Ray Leonard was somewhat impressed with both of the fighters, however at the same time, the announcers were cracking jokes about the fight.

After Nate Robinson was knocked out, it was turned into a meme on Twitter and all over social media, with people tweeting and retweeting Robinson laying on the mat.

That’s all it should be: entertainment, with creators fighting each other. But of course creators in the community do not have an off button, making them feel the need to up the stakes to actually fight somebody professionally.

If the fight does happen, nobody would take it seriously, with even the pugilists thinking it’s a joke.

This side of boxing could be big with the YouTube community. When the first match of YouTube boxing happened between KSI and Logan Paul, it was huge with millions tuning into the stream.

Now it is attracting many great fighters like “Iron” Mike Tyson wanting to see more creators going a couple rounds in the ring.

It could be taken even further with getting artists to perform like they had on the Saturday match, turning into a sort of new halftime show between fights with well known music artists this time.

Entertainment is what the people want, and it can work if it is done right. The people behind the scenes of boxing were smart choosing Jake Paul to fight knowing the viewership will expand making people stay to watch, with fans hoping to see him win and haters hoping to see him fall.