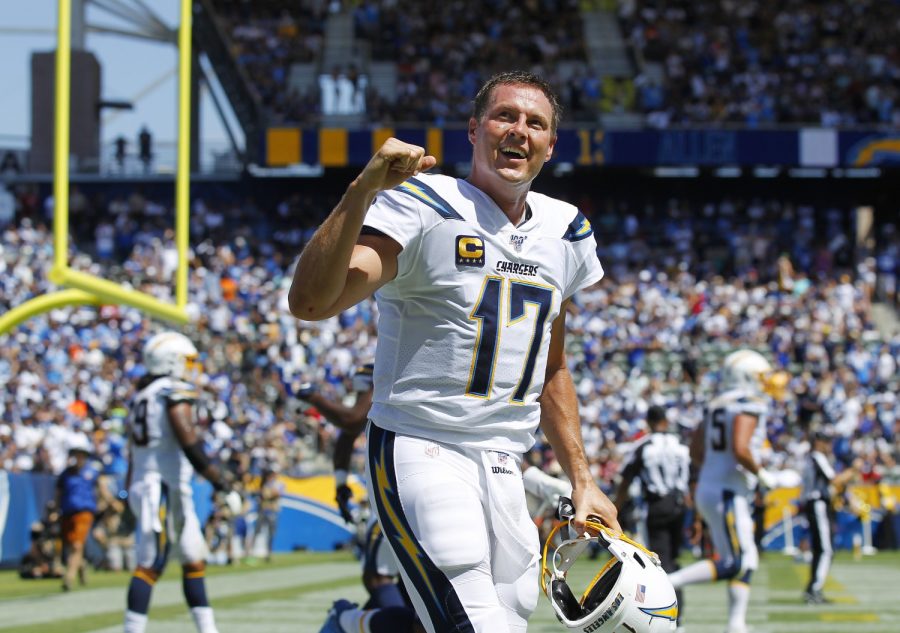 Los Angeles Chargers Philip Rivers after he threw a touchdown pass to Keenan Allen against the Indianapolis Colts in the 2nd quarter in Carson on Sept. 8, 2019. Photo credit: K.C. Alfred/TNS

It is no question that Philip Rivers is undoubtedly one of the best quarterbacks of our generation, and after 17 years, Rivers has finally called it a career and is retiring. One of the many questions following the end of Rivers long career is if he is Hall of Fame worthy.

His statistics are unarguably elite. Rivers is top five in both passing touchdowns and passing yards all time.

The former Charger is also as durable and tough as it gets. He falls just short behind Hall of Famer Brett Favre in consecutive regular season starts with 242.

Rivers also adds eight Pro Bowls to his name as well as being awarded Comeback Player of the Year in 2013.

Regardless, there are quite a few reasons why people consider Rivers to not be a lock in the Hall. One reason is his playoff resume.

Rivers is 5-7 in the postseason and had a 16-10 touchdown to interception ratio. He ends his career with no ring and not even a Super Bowl appearance.

Speaking of interceptions, Rivers also ended his career 23rd all time and had 25 pick-sixes, ranking sixth all time.

Rivers also lacks in accolades. He never once won an MVP and was never a first- or second-team All-Pro. Some would even say he was rarely in contention for these awards.

It is believed that the main reason Rivers is slept on is because of the crazy quarterback talent that surrounded him throughout his entire career.

Rivers played against legends like Tom Brady, Peyton Manning, Aaron Rodgers and Drew Brees who are all Hall of Fame guarantees. Other talented quarterbacks also dominated the league such as Ben Roethlisberger and Eli Manning.

One thing that all of these quarterbacks have in common is that they have at least one Super Bowl ring.

Every quarterback to ever be inducted has an All-Pro selection to their name or won a Super Bowl.

Luckily, football is a team sport. Using wins to justify one’s case in greatness would just not be fair.

Rivers never had anything close to the teams or coaching staffs that the quarterbacks named prior did. How is that his fault?

What is also in the former Charger’s favor is the fact that the Hall of Fame does not judge someone’s worthiness among other players.

It is not right to judge every player based on another player. Greatness has different levels.

The Hall of Fame case for Philip Rivers is certainly a long and controversial one.

Although he does not have the jewelry or resume that other quarterbacks in his era have, his consistency and longevity speak for themselves.

Rivers may not be a first ballot Hall of famer, but this man 100 percent deserves a gold jacket. Do not be surprised to see the Alabama native in Canton.