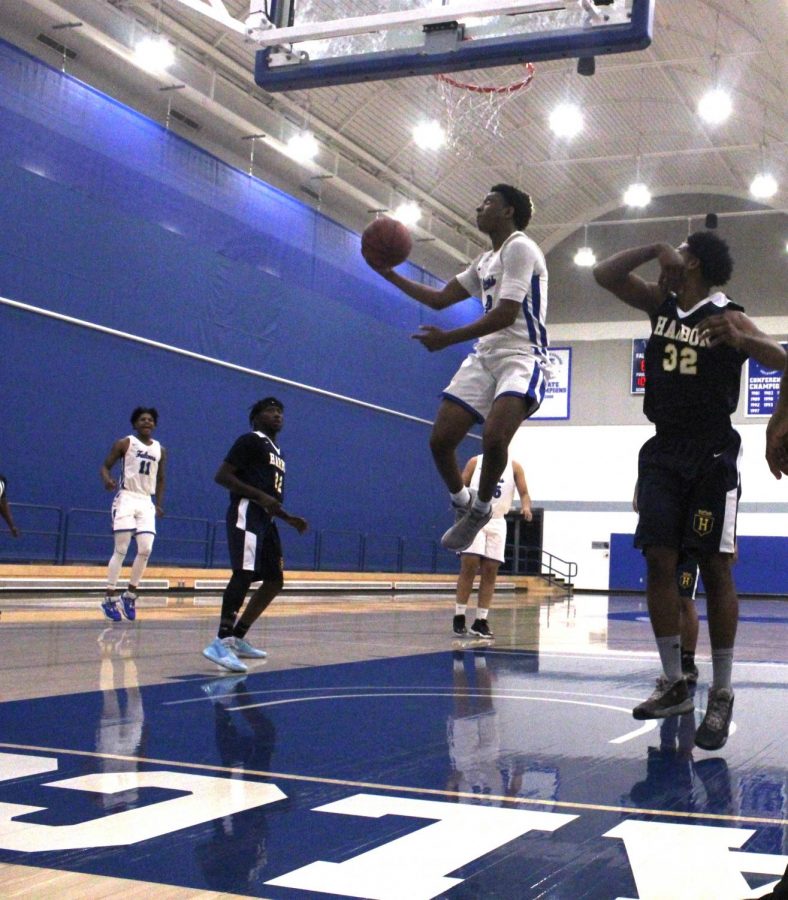 Sophomore Point Guard no.2, Joshua Belvin, elevates under the rim to score a hard-worked two points. The basketball team is eager and prepared to go back to practice and start competing in games. Photo credit: Keanu Ruffo

“Of all the coaching I have done in my years I would never think this would have happened to sports” Cerritos Head basketball Coach Russ May said about the pandemic and lockdown.

May said that he thought this global pandemic would be over quickly, like the Ebola epidemic was in 2014, but he soon realized he was not ready for the series of events soon to take place. He says that he wishes that things were back to the way that they used to be.

As he further explained, moments before the pandemic happened, he got a call from the Dean of Athletics at Cerritos, Rory Natividad, saying that the season was cancelled.

“I was looking forward towards 2020 but my dreams weren’t going to happen this year.” May was very adamant about how COVID-19 ruined the teams year since no one can play basketball anymore until further notice. But his attitude has improved and he has a positive outlook on the future now.

May has been teaching online classes during the pandemic, such as weight training for beginning and intermediate courses.

He’s also been training his basketball players throughout the pandemic while coaching them by Zoom meeting, getting them in shape to stay prepared for the upcoming season.

May wants his players to stick with the program and to pay close attention on the court and off the court.

Academically, he wishes everyone would have a different mind set in times like this.

Two of May’s best players on the team are sophomores Dorian Harris, 20, and Joshua Belvin, 20.

Harris, a small forward who has been very disappointed with the circumstances brought on by the pandemic, expressed similar thoughts as Coach May. “This virus is going to get bad before it can get good,” Harris says.

He continues to still train and work hard during his time away from Cerritos and hopes that this pandemic will end so he can go back to playing ball with his teammates.

Belvin, a point guard who averaged 17 points a game last season, shared his thoughts on if the pandemic has changed his passion for basketball: “Honestly this pandemic didn’t change my mindset, my abilities, I always train with or without the gym,” Belvin said.

Belvin trains in Signal Hill, local parks, beaches and anywhere he can run.

“I miss my teammates, I really did think this was our year to shine,” Belvin said.

Harris and Belvin mentioned some of the things Coach May has taught them so they be on the path of becoming true champions.

He has taught them how to train, study for school and to be thorough in anything that they ever do, and overall wants the best for his players during these troubling times.

May wants his players to never forget the main goal of what he is teaching them. He wants them to understand to stay precise and to never get discouraged because of what’s happening in the world right now.