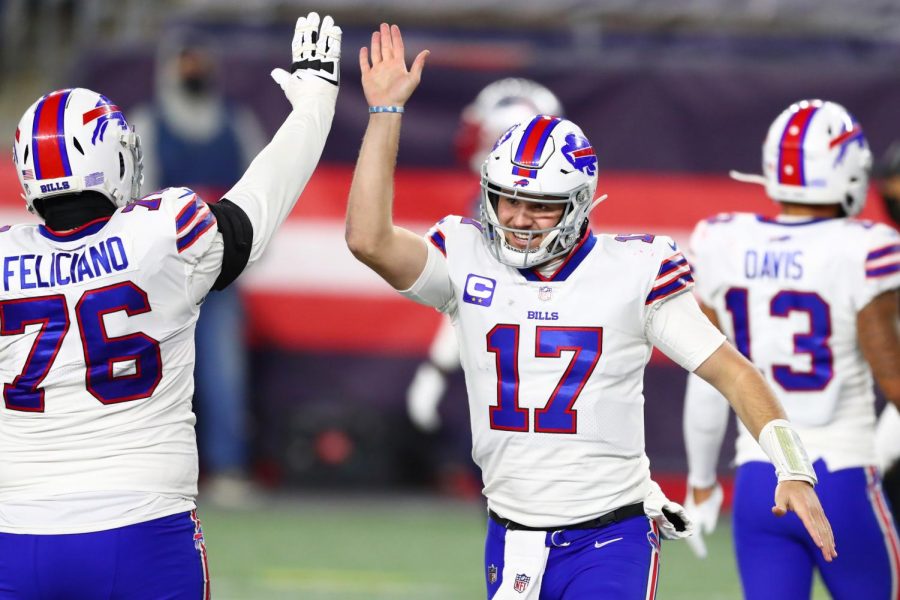 The Buffalo Bills' Josh Allen (17) and Jon Feliciano (76) celebrate during the second half of a 38-9 win against the New England Patriots at Gillette Stadium in Foxborough, Massachusetts, on December 28, 2020. (Adam Glanzman/Getty Images/TNS)

The NFL had one of the most wild off-seasons in years, and is the most balanced in the league’s history.

Teams who seemed to be a piece away from really contending last year made some noise during free agency.

One team that made sure to make as many roster changes as possible was the New England Patriots.

Alongside the 2020 opt-outs and the new offensive weapons for quarterback Cam Newton, Belichick is bound to return to the postseason.

The Tennessee Titans, who fell in the 2020 Wildcard, added hall of fame wide receiver Julio Jones to pair with star running back Derrick Henry and add young talent, AJ Brown.

The Arizona Cardinals made some similar moves by acquiring wide receiver AJ Green and former three-time Defensive Player of the Year JJ Watt.

If Arizona was not playing in the toughest division of football they would definitely be a playoff lock.

The Cleveland Browns were impressive during last year’s playoff run, taking down the Pittsburgh Steelers and losing a nail-biter to powerhouse Kansas City Chiefs.

With the return of wide receiver Odell Beckham Jr and the additions of defensive lineman Jadeveon Clowney and safety John Johnson, the Browns can make a real run in 2021.

Despite not making too much noise in free agency, teams not to forget about including the always dangerous Seattle Seahawks, the Lamar Jackson-led Baltimore Ravens and the healthy San Francisco 49ers.

Every one of these teams is poised for the playoffs, and a deep run is well within reach.

Three teams who are certainly looking for a Super Bowl run in 2021 are the Los Angeles Rams, Buffalo Bills and the Green Bay Packers.

Despite quarterback struggles throughout 2020, the Rams finished 10-6 and had the number one defense in the league.

Trading for veteran quarterback Matthew Stafford might push the Rams over the top in 2021.

Any team led by MVP Aaron Rodgers is a contending team. The Packers were a win away from the Super Bowl last year and are looking to finish the job in 2021.

If there is any team in the AFC that can possibly take down the juggernaut Kansas City Chiefs, it is the Buffalo Bills.

A team that seems to be only getting better and better, Buffalo, led by MVP candidate Josh Allen, will hope to get their first franchise ring in 2021.

Despite the offseason drama, two teams remain on top of the league.

Back to back AFC Champions Kansas City Chiefs will be trying to make their third Super Bowl in a row.

With new additions to the offensive line to protect superstar Patrick Mahomes, the Chiefs are looking tough to bring down in 2021.

The team to beat in the NFC is defending Super Bowl Champions Tampa Bay Buccaneers.

NFL fans are in for an exciting year.