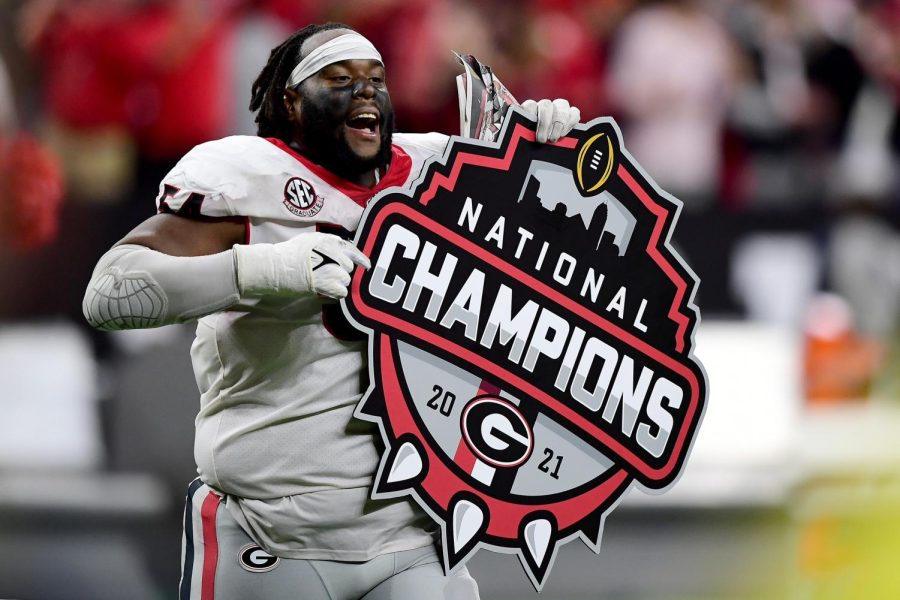 The No. 3 ranked Georgia Bulldogs football team defeated No. 1 Alabama Crimson Tide 33 – 18 in the College football playoff national championship game on Jan. 10, 2022. The game was held at Lucas Oil Stadium in Indianapolis Indiana, as Georgia kicked off to Alabama to start the game.

The Crimson Tide opening offensive drive would be led out by Heisman winning sophomore quarterback No. 9 Bryce Young who led the Alabama offense down the field 14 plays for 56-yards. The drive would result in a field goal made by Alabama kicker Will Reichard.

The Bulldog’s first offensive drive would lead to a three and out as the Crimson Tide defense set the tone and swarmed the ball to force a punt from Georgia. Both teams’ second possession would lead to punts as a great defensive game was being played from each team.

However, the Bulldogs knew they had to respond, being down 3 – 0 late in the first quarter as senior quarterback No. 13, Stetson Bennett led the Georgia offense 11 plays for 87 – yards which ended up in field goal tying the game 3 – 3 early in the second quarter.

Alabama, going in as the No. 1 ranked team, in the game knew they had to play at that standard as Young connected with junior wide receiver No. 1 Jameson Williams on a 40-yard pass after the Georgia field goal. The Bulldogs held the Crimson Tide to the Georgia 28-yard line forcing a field goal putting Alabama up 6 – 3.

The Bulldog’s next offensive drive would result in a punt which gave Alabama back the football at their 26-yard line, Young connected with junior tight end No. 81, Cameron Latu on second and five for 61-yards for first and goal on the 8-yard line. The Bulldogs would hold Alabama down to another field goal putting the crimson tide up 9 – 3.

Georgia’s hopes weren’t all over yet as a nine-play drive for 34 yards after Bennett failed to pick up a first down for the Bulldogs which would end up in a 49-yard field goal attempt that was good from kicker No. 91 Jack Podlesny making it a 9 – 6 ball game at halftime.

Alabama’s first two drives to start the third quarter would end in an interception, and a missed field goal.

Things started to heat up late in the third quarter for the Bulldogs as senior running back No. 4 James Cook rushed for 67-yards on a first down carry to set Georgia up on the 13-yard line. Three plays later junior running back No. 3 Zamir White punched it for six for the first touchdown scored in the ballgame putting them up 13 – 9.

The Crimson Tide would have to settle for another field goal after a 10 play drive that would open up the fourth quarter, Alabama was still down by one as the score was 13 – 12. Alabama’s defense stepped up as they forced a fumble from Bennett which was recovered by the defense, turning the ball over to the Crimson Tide on the 16-yard line.

It would set up Alabama nicely as Young found Latu open for a 3-yard touchdown on third and goal, Alabama attempted to go for two but failed to make it 18 – 13 as the Crimson Tide would regain the lead. Georgia responded loud and clear as Bennett delivered a 40-yard touchdown on a free play due to an offsides penalty on Alabama, the Bulldogs regained the lead 19 – 18 after failing to convert for two points.

On their next Bulldogs offensive drive, Bennett connected with freshman tight end No. 19 Brock Bowers on a 15-yard touchdown pass. Georgia was now up 26-18. The knockout play of the game came on the next offensive series for Alabama, Young was picked off by freshman defensive back No. 5, Kelee Ringo who ran it back for the Bulldogs touchdown putting them up 33-18 with less than a minute in the fourth quarter.

Alabama was unable to put any points with a minute left of the game. The Georgia Bulldogs would go on to win 33-18, the first time since 1980 that Georgia would win the College Football Championship.