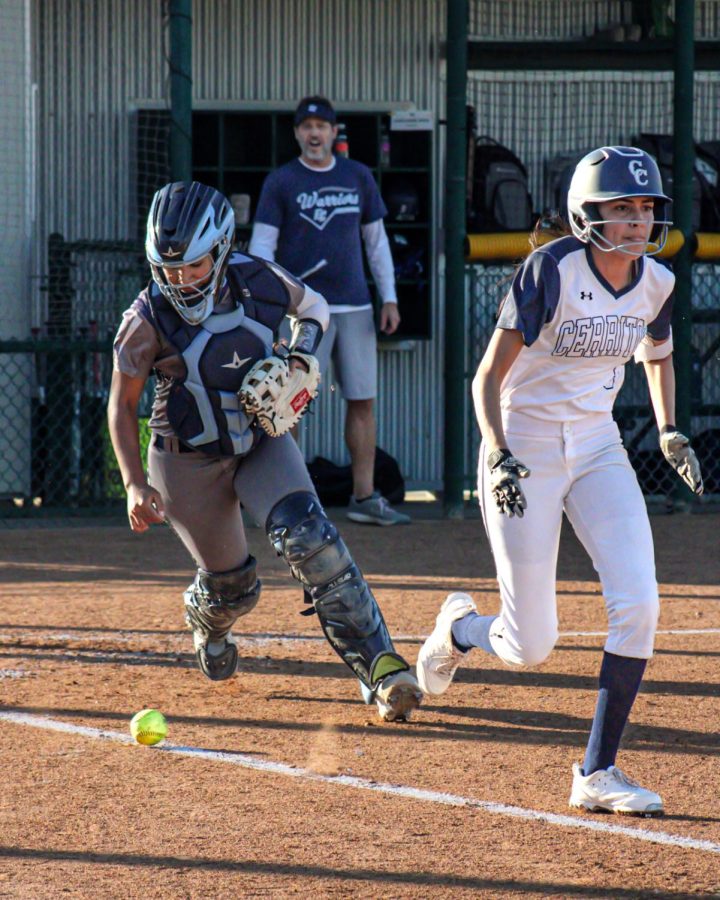 Freshman utility player, No. 9, Havyn Marines bunts as she runs to first base. It would be called back for the foul ball but would get another chance to bat against the Warriors in the bottom of the fifth inning on Feb. 10

Freshman pitcher, No. 7, Samantha Islas started the game on the mound against the El Camino Warriors. She retired the top of the first inning with two K’s.

The Falcons softball team starts big in the bottom of the first with a grand slam by freshman pitcher/infielder No. 5, Richere Leduc as she collects four RBIs to make it 4-0.

The Warriors would score off a fielding error at the top of the third inning as No. 9, Kayla Inzunza put El Camino on the board.

In the bottom of the fourth, freshman pitcher, No. 12, Maddy Guillen would be walked, followed behind freshman outfielder, No. 27, Negasse Williams would be hit by the pitch to take first and second base.

Freshman outfielder, No. 4, Alyssa Capps grounded out off a bunt, leading to Guillen and Williams advancing to second and third base.

Freshman second baseman, No. 24, Alyssa Sotelo singled to center field and collected one RBI as Guillen would score the Falcons fifth run of the game, Williams was not too far behind as she rounded third base and was tagged out at home plate.

The Warriors would make some defensive adjustments in the bottom of the fifth, Diaz was struck by a pitch, Bedolla would be walked, Leduc singled to warriors third baseman to load the bases for Cerritos.

Williams was walked at the plate, collecting one RBI and the go-ahead score for Cerritos as Diaz made it 6-1 against the Warriors. Freshman utility player, No. 9, Havyn Marines flew out to center field leaving three LOB at the end of the fifth.

In an intense battle in the top of the sixth for the Falcons, the defense bends but did not break to end the inning with three runners on each base with two outs as Islas K’s No. 11 Clarissa Lockett.

The Falcons defense held El Camino to only one run scored in the ball game. In the bottom of the sixth inning, Diaz would collect herself one RBI through a sacrifice fly ball to third base.

Capps would round third and slide home for the unearned run due to an error from the warriors. Cerritos would be up 7-1, Bedolla would ground out to third base and retire the bottom of the sixth inning.

Cerritos would end the game in the top of the seventh as the Warriors grounded out, popped up, and fouled to Bedolla and Sotelo to end the game.

Islas would earn her third win pitching all seven innings to improve to 3-1 on the season. She earned seven K’s against El Camino only allowing six hits and one run.

Softball improves to 6-2, on a four-game winning streak. “Working to continue our consistency,” coach Kodee Murray says, “practicing all their fundamentals in pitching and batting.”

Cerritos softball will play Cypress college at home on Saturday, Feb. 12, at 1 p.m.