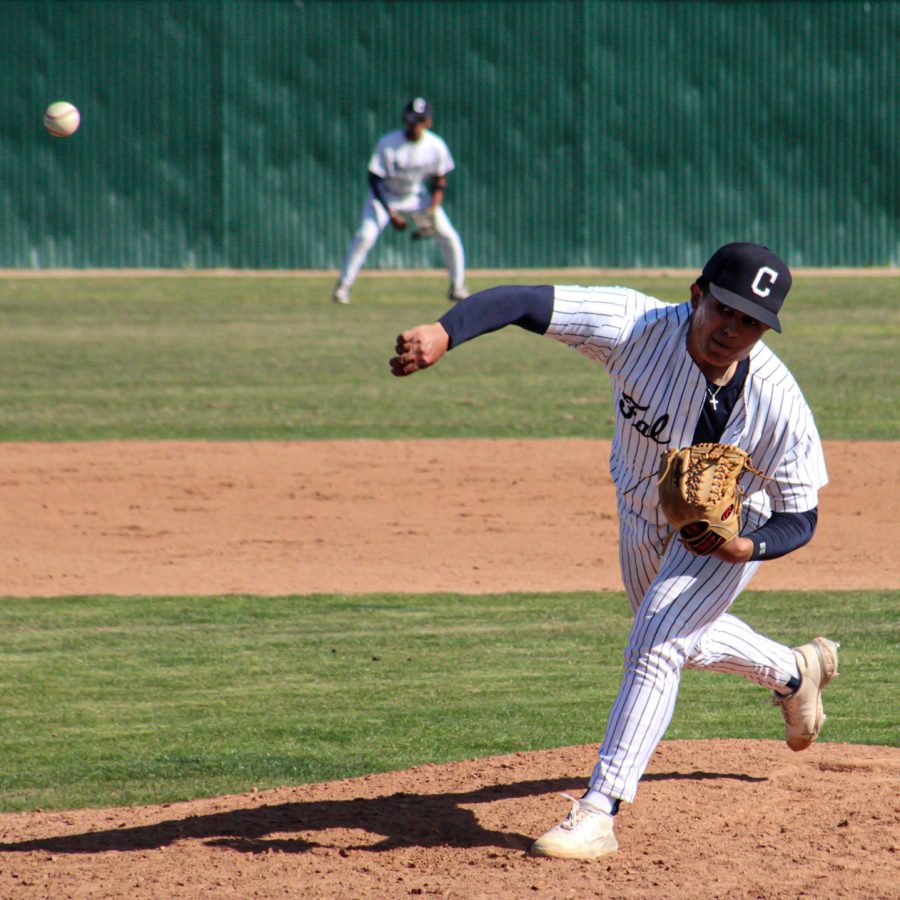 Freshman RHP, No. 9, Jael Leal comes into pitch at the top of the fifth inning for the Falcons. Leal would pitch three-innings allowing only one run against West LA on Feb. 19. Photo credit: Roman Acosta

Cerritos loses 12-7 at home against West LA on Saturday, Feb. 19. What started as a great defensive game for the falcons turned out to be an unexpected ending.

At the top of the seventh inning, starting players were plugged into their main positions on defense after sitting out the first six innings.

The Wildcats were up 2-1 to start the top of the seventh as they were held to no runs by freshman RHP, No. 9, Jael Leal who was pitching for the Falcons.

The Falcons started off the bottom of the seventh with a walk as freshman infielder, No. 24, Bilal Ali was able to steal second.

Freshman outfielder, No. 31, Miles Velez was walked at the plate and Ali was able to take third off a wild pitch by the Wildcats, Velez took second base as well.

First baseman, No. 20, Dean Ormonde was up to bat when he sacrificed flied out to right field for Ali to score and Velez advanced to third to tie the ballgame at 2-2.

Outfielder, No. 16, Manny Fregoso took first as he walked at the plate. Shortstop, No. 15, Andy Vega would advance to second on a fielder’s choice that led to Fregoso and Velez being pickled at home plate.

Catcher, No. 3, Alex Bueno would pinch hit for Daniel Castellanos (who started the ballgame at catcher.) as Bueno would be walked, the Wildcats would call for a mound visit.

West LA would send in a new pitcher in the seventh inning. On a wild pitch that flew over the Wildcats catcher, Bueno and Vega would advance a base as Fregoso would score to put the Falcons up 3-2.

Infielder, No. 2, Luis Chavarin Jr. struck out to end the bottom of the seventh inning.

Freshman LHP, No. 26, Matt Cabrera would start the top of the eighth on the mound. Cabrera would pitch 0.2 innings as he gave up three hits, five runs and a K.

RHP, No. 46, Joseph Cossette would relieve Cabrera to finish the inning. He would retire the bottom of the eighth inning allowing a run, and two hits as the Wildcats took an 8-3 lead.

The Falcons kept their head up as they attempted to cut the large deficit. Bases were loaded as outfielder, No. 23, Angel Alvarez would collect an RBI on a sacrifice fly out to right field allowing infielder, No. 14, Lucas Iorgulescu to score.

Chesley would round off second base, Ormonde would round third base and score, off a throwing error from the Wildcats.

The Falcons left two runners on base at the end of the inning as they scored four runs to make it 7–8 against West LA.

Freshman RHP, No. 10, Carter Stoddard would relieve Cossette at the top of the ninth inning. A disastrous ninth inning for the Falcons made their come-back chances out of hand.

Stoddard would give up four runs on three hits, and a home run before retiring the ninth inning. The Falcons were down by five runs at the bottom of the ninth.

A three and out ended the bottom of the Ninth for Cerritos. West LA would win 12-7 after using Seven pitchers against the Falcons.

Cerritos record moves to 3-6-1. The Falcons will play their first conference game on Tuesday, Feb. 22, at Los Angeles Habor at 2 p.m.