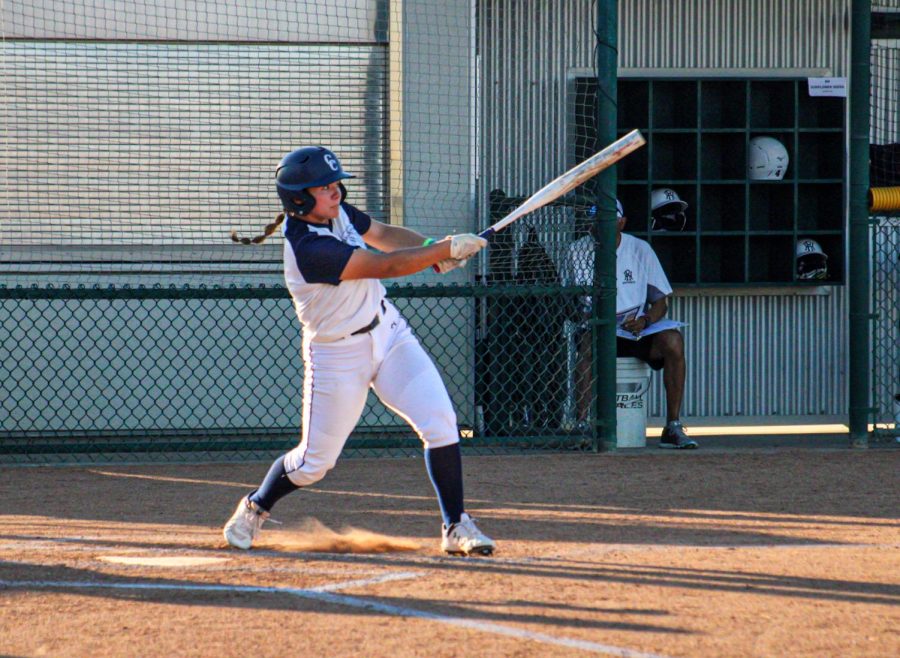 Freshman third baseman, No. 3, Brooklyn Bedolla at the plate smacks the ball for the game-changing momentum the Falcons needed. She doubled in the bottom of the sixth to bring life to her team against the Roadrunners on March, 1 2022.

Cerritos softball rallies in the bottom of the sixth inning scoring eight runs on nine hits to dominate the Roadrunners.

Things weren’t looking so great for Cerritos throughout the ballgame as they were shutout for the first five innings against the Roadrunners.

Failing to capitalize on runs hurt the Falcons leaving a total of six runners left on base as Rio Hondo was already up by two runs at the top of the sixth.

Freshman first baseman, No. 5, Richere Leduc started off the bottom of the sixth, flying out to infield for the first out. Freshman pitcher, No. 12, Maddy Guillen singled to right field.

Utility, No. 9, Havyn Marines pinch ran for Guillen at first. Freshman third baseman, No. 3, Brooklyn Bedolla brought the momentum swing the Falcons needed as she doubled as Marines advanced to third.

The Roadrunners call for a mound visit substituting their pitcher in hopes of retiring the inning. Freshman outfielder, No. 27, Negasse Williams grounded out for the second out.

The Falcons were still scoreless with two outs when Ariana Hamilton came into pinch hit for freshman outfielder, No. 2, Angelica Gonzalez. Hamilton singled through the right side.

Hamilton collected an RBI as Marines scored and Bedolla advanced to third. Gonzalez pinch ran for Hamilton at first. Freshman outfielder, No. 4, Alyssa Capps singled on a bunt advancing Gonzalez to second.

Freshman second baseman, No. 24, Alyssa Sotelo singled through the middle as she brought in Bedolla who was the tying run at third and just what the Falcons needed to take control of this game.

Freshman catcher, No.23, Vicky Najera singled down third base with bases loaded. Gonzalez scored the leading run leaving bases loaded as the Falcons took a 3-2 lead.

Miranda Diaz was walked at the plate collecting an RBI as Capps scored the unearned run. Leduc was struck by the pitch at the plate, scoring another run for the Falcons through an RBI.

The Falcons kept this momentum shift rolling in their favor, the score was 5-2 as Guillen had another plate appearance as she singled up the middle collecting another RBI as Najera scored.

With bases loaded once again, Bedolla had another plate appearance as the Falcons went over the entire starting line in the sixth inning. The score was 6-2 when Bedolla singled to right field collecting two RBI’s as Leduc and Diaz scored putting Cerritos up 8-2.

Williams second plate appearance kept the Falcons in business as she singled on a bunt to keep all the bases loaded. Gonzalez popped up in the infield to end the inning as the Falcons win was just an inning away.

Freshman pitcher, Samantha Islas started the game and was three outs away from another win on the season.

With runners on first and third the Roadrunners were able to score one more run off a single, Islas would pick off the runner at first as Leduc made the tag for the second out.

Gonzalez caught the fly ball in right field for the final out of the game and the 8-3 win over Rio Hondo.

Islas finished the game with seven K’s as her win record improves to 8-1 on the season. The Falcons are on a Five game winning streak, with an overall record of 13-4, and 5-2 record in conference.

Cerritos will play Long Beach City at home on March. 17 at 3 p.m.