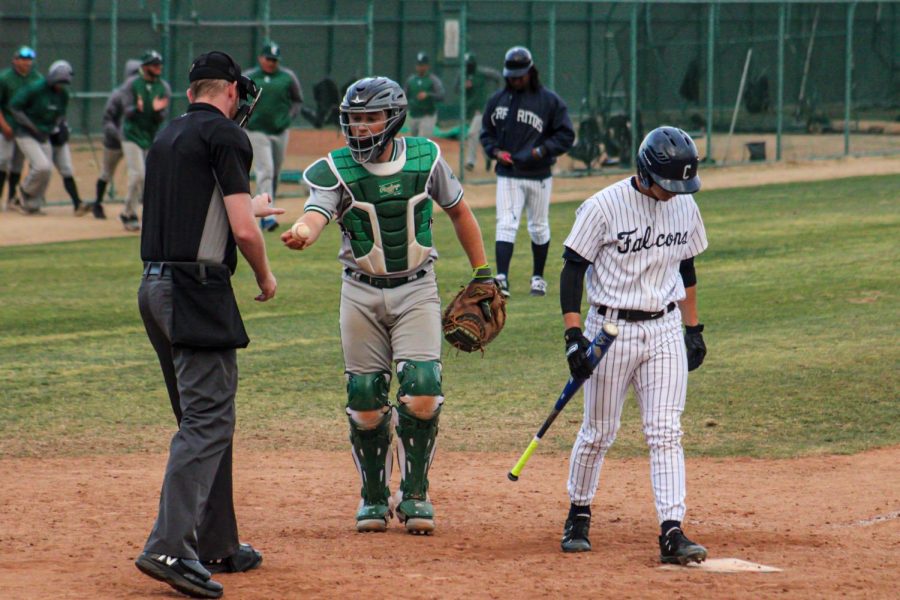 Manny Fregoso struck out looking for the final out of the ball game against East Los Angeles. The Falcons fall 3-1 at the end of the ballgame leaving the tying run on first on March. 3.

Cerritos loses 3-1 at home against East Los Angeles. Freshman RHP, Justin Almeda started the game on the mound for the Falcons.

Both teams were held out for the first three innings of the ball game. In a windy game, both teams were struggling to get any hits going.

Freshman outfielder, Jean Francois, tripled to right field to start the bottom of the fourth which kickstarted life into the Falcons dugout.

Second baseman, Dean Ormonde grounded out to the shortstop and collected an RBI as Francois scored the first run for the Falcons.

Sawyer Chesley and Mike Santos grounded out to the shortstop in the bottom of the Fourth to end the inning as Cerritos took a 1-0 lead over the Huskies.

Top of the Fifth, Almeda retired the inning in the clutch as East Los Angeles had bases loaded and failed to score as Ormonde got the third out to end the inning.

Almeda had Four K’s till the Fifth inning. At the top of the sixth, he struck a batter giving up a base. The next batter singled to right field putting runners on first and second.

The third batter singled through the middle and collected an RBI as the runner on second scored.

A throwing error by Almeda trying to get a runner out at third base allowed runners to score unearned as the ball carried past the foul line.

That crucial error was responsible for the Huskies only runs of the game as they scored three runs at the end of inning to take a 3-1 lead.

The Falcons lost momentum offensively as freshman outfielder, Terril Steen Jr. grounded out to start the bottom of the sixth. Francois flied out and Chesley fouled out to end the inning.

The Falcons shut out the Huskies from scoring throughout the rest of the game holding them to three runs.

At the bottom of the ninth Chesley started off as he singled, Miles Velez pinch ran for Chesley at first. Santos singled as Velez made it to second.

Hasan Standifer pinch ran for santos at first. Lucas Iorgulescu reached first on a fielders choice as Standifer was safe at second and Velez got tagged out at third.

Andy Vega pinch hit for Jason Givens and reached on a fielders choice as Standifer was tagged out at third.

With two outs, Manny Fregoso struck out looking for the final out of the ball game leaving the tying run on first.

Update: Cerritos versus Los Angeles Harbor, Thursday’s tiebreaker was settled on Saturday, Feb. 26. Cerritos scored a run in the bottom of the 10th inning.

Sophomore shortstop, Andy Vega ended the game on a walk-off home run for the 6-5 win against the Seahawks.

Sam Rodriguez injury: Coach Vic said he is doing better now, he had surgery on it and Rodriguez will let us know if he will be able to play by next year.