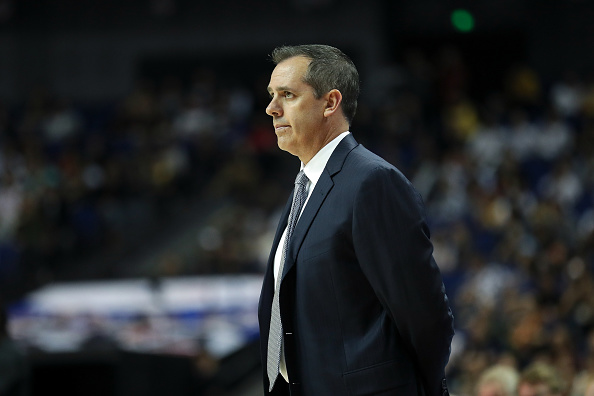 SHANGHAI, CHINA - OCTOBER 10: Head coach Frank Vogel of the Los Angeles Lakers looks on during a preseason game as part of 2019 NBA Global Games China at Mercedes-Benz Arena on October 10, 2019 in Shanghai, China. NOTE TO USER: User expressly acknowledges and agrees that, by downloading and/or using this photograph, user is consenting to the terms and conditions of the Getty Images License Agreement. (Photo by Lintao Zhang/Getty Images)

On Monday, the Los Angeles Lakers made the firing of head coach Frank Vogel official after league wide speculation that the decision had already been made on Sunday night following the Lakers final game of a disappointing season.

The Lakers finished the season with a 33-49 overall record and missed the playoffs.

Vogel takes the fall for one of the most underachieving teams in Lakers history, despite winning the NBA championship in 2020 for the 17th title in franchise history, and having one year left on his current contract.

The Lakers promising roster was derailed by injuries throughout most of the 2021-22 season.

The Lakers core of LeBron James, Anthony Davis, and Russell Westbrook played only 21 games together this season, with a record of 11-10 in such games.

LeBron James’ 30.3 points per game average, second best in the league, behind Philadelphia 76ers star Joel Embiid couldn’t will this roster to qualify for even the NBA play-in tournament.

In three years as head coach of the Lakers Vogel’s overall record was 127-98 with a .564 winning percentage. Vogel’s role in the Lakers resurgence as a prominent franchise in the NBA after a stretch of forgettable years and an identity crisis within the organization shouldn’t be diminished by the firing.

The new head coach is more than likely to takeover a team headlined by a 37-year-old Lebron and 29-year-old Davis while the rest of the roster is restructured by Pelinka. The search for a head coach won’t be the hard part for the Lakers’ general manager.

Before or after hiring a new coach, though, Pelinka will have the tough task of finding trade partner to take Westbrook off his hands.

It’s easy to blame the Lakers’ struggles on injuries or point the finger at the head coach but if you look at the root of it all the Westbrook roster fit never made sense. The trade value for a former MVP has never been lower and now Pelinka must fix the problem he created.

Outside of the Westbrook dilemma, the health of Davis is almost always in question. Davis played in only 40 games this season and 36 games during 2020-21 season. He hasn’t played in more than 62 regular season games since the 2017-18 season.

No matter what roster Pelinka builds around Lebron and Davis, if Davis isn’t healthy it won’t matter.

The Lakers’ search for a head coach might include some current head coaches around the league, some coaches looking to get back in the league after some time off, whoever it may be will have to win quickly with Lebron on the back end of his career and entering the final year of his contract.

Just as Vogel did, the new head coach will have high expectations that comes with the storied Lakers’ franchise and they’ll be handed over whatever roster that Pelinka constructs, for better or worse.