Royalty is fading for LA Kings before playoffs 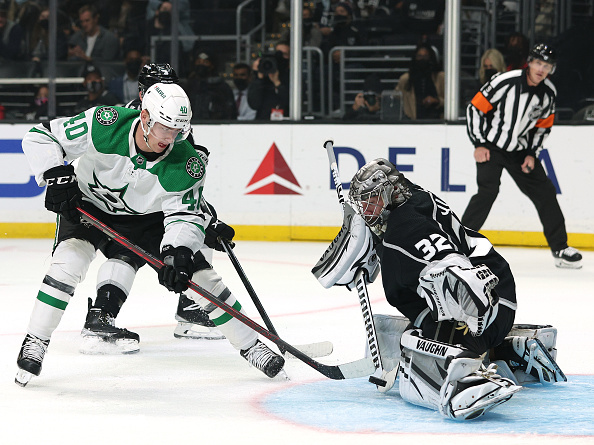 LOS ANGELES, CALIFORNIA - DECEMBER 09: Jonathan Quick #32 of the Los Angeles Kings makes a save on Martin Hanzal #40 of the Dallas Stars during a 4-0 Kings win at Staples Center on December 09, 2021 in Los Angeles, California. (Photo by Harry How/Getty Images)

The Los Angeles Kings are going back to their old losing ways right before the end of the season. The Kings have now lost six of the last nine games and have dropped to third place in the pacific.

Now why is this happening to our Kings? Well the Kings have not had healthy players throughout the season. They had to deal with injuries and positive covid tests.

It goes back on October of 2021, when defense-men Drew Doughty went down and was out for six weeks. Then he came back and tested positive for covid. Now he injured his hand and will be out for the remainder of the season. Doughty ended the season with (7-24-31.)

Then defense-men Sean Walker went down in October as well and tore his ACL and MCL in a loss to the St.Louis Blues. The Kings had a lot more injuries and positive covid tests that even included coach Todd McLellan testing positive.

The Kings had a total of 31 players out due to injuries, positive covid tests and health protocols. They had to rely on the players they have been developing with their minor league affiliate, the Ontario Reign.

It has been a roller coaster ride for the Kings throughout the season. Los Angeles has gone through injuries and covid but despite all of that, they were able to use what they had to be in the position they are at now.

Despite the fact they are now third in the pacific, the Kings still have a shot at making the playoffs with less than 10 games left in the season.

However, they need to keep winning and gather more points as the Vegas Golden Knights are catching up to them by one point. If the Kings make it, they will be the first California team to qualify for the playoffs since the Sharks lost in Western Conference Finals in 2019.

They certainly need to improve even when they make it.The last time the Kings made the playoffs was 2018 when they were swept by the Golden Knights and the last time they won a playoff game was 2016 against the San Jose Sharks.

Will the Kings clinch their playoff spot? We will find out when the playoffs start on May 2.